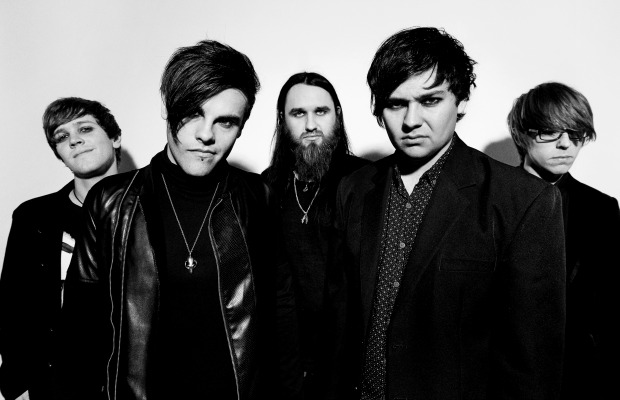 UPDATE: July 5, 2016 at 10:30 a.m. EST
FVK have announced that all upcoming performances, barring Shield Fest on July 17—where Kemp will not be playing with the band—have been canceled. Those shows include appearances at both Reading and Leeds festivals among others. The band are expected to announce a farewell show soon.

UPDATE: July 4, 2016 at 3:45 p.m. EST
Departing co-vocalist/guitarist Kier Kemp has released his own statement, which you can read below:

Thought you deserved a little more than just the PR spiel. We all owe you a lot. Firstly I guess i'd just say that I wish there was another way… believe me I tried. When you're a kid the dream is to obviously go that whole distance with your first band… but sometimes stuff just doesn't pan out exactly as you want it to.

It got to a point where things just wasn't adding up and as the boys often looked to me for answers I just found myself without anything to say… something like Fearless Vampire Killers required nothing less than utter dedication and when I realised I had lost that I felt like a fake.

So now here we are. I'm writing to you saying i'm sorry for any heartache and lets try and dig something a little more positive out of all of this. There is a legacy. There is a message that we had and despite instantaneous reactions all of FVK are my dear friends and i'm sure that won't end. At least I hope it won't.

No one is going to stop making music. Certainly not me as this has been my life's work. So here's to many more years of creativity and experiences. See you guys soon no doubt.

ORIGINAL POST: July 4, 2016 at 3:06 p.m. EST
FVK (Fearless Vampire Killers) have announced that they will no longer continue with the band following the departure of co-vocalist/guitarist Kier Kemp last Friday, July 1. The band say that though they cannot continue as FVK, the remaining four members may continue working on music together and have said they will keep fans abreast as they take “time to rebuild and reflect.”

“We – Laurence, Luke, Shane and Drew – will certainly continue to make music together; though the specifics of this are uncertain. We would also like to wish our friend Kier the best of luck in his future endeavours.”

There is no word as of yet on the band's upcoming live shows and appearances at Reading and Leeds festivals.

Read the band's full statement below:
“A difficult announcement. Last Friday, Kier announced that he was leaving FVK. This revelation was greeted with shock, disappointment, and heartbreak as we have given our lives to this band and the idea of giving up was completely alien to us. However, over the weekend we have struggled to find the answer to this unfortunate situation, and we have come to the conclusion that it would be wrong to continue this band without Kier by our side.

Please note that this decision was not an easy one for Kier to make, but the alternative would be him continuing something that he no longer passionately connects with – which is not good for him, you or us. He apologises for any upset this may cause and is available in all the usual places if anyone has any questions or would like to talk more about it.

FVK has always been more than just a name, and no one is disappearing – the remaining members of FVK will not abandon our musical union, but we will need time to rebuild and reflect. Music has always been our passion, and the idea of doing it without our friends seems absurd. We – Laurence, Luke, Shane and Drew – will certainly continue to make music together; though the specifics of this are uncertain. We would also like to wish our friend Kier the best of luck in his future endeavours.

The Obsidian Bond will actively remain a place for the open and creative minded, and you to maintain the community that acted as FVKs driving force for many years.

To our fans we apologise wholeheartedly, this is not the ending we chose, but our hands have been forced. All we can say is thank you for your support, and please remember our music lives on forever, and that the creative force behind FVK will return. Speak soon.”