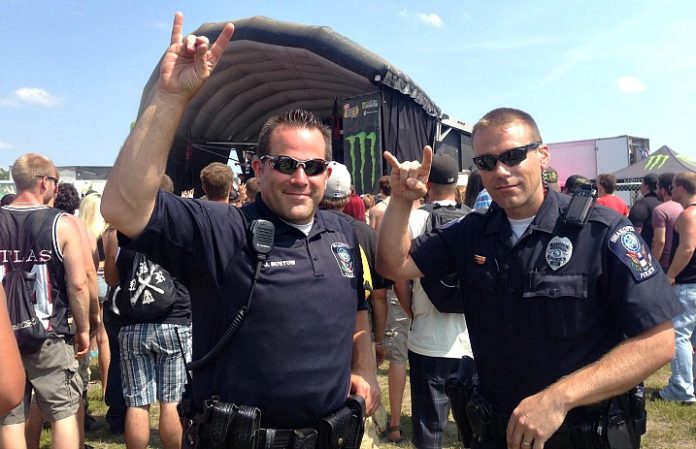 There’s a police department in Minnesota that’s just as anxious as the rest of us to find out what bands will be playing Warped Tour 2016.

Read more: Warped Tour lineup to be announced all at once

The Shakopee Police Department, southwest of downtown Minneapolis, posted the following on their Twitter account this week:

How are there NO @VansWarpedTour leaks yet? Wish we could use our police super powers to figure this out…

The department works with the Warped Tour security team to provide additional support during Warped’s Shakopee stop. Crime Analyst Janna Wood runs the Twitter account and looks forward to Warped Tour every year. In fact, she used to attend as a guest before getting hired at the police department. She says the department wanted to send a message to Warped Tour fans with the tweet.

“We want Warped Tour attendees to know that we aren’t there to just hamper their fun. Of course we are going to enforce the laws and do what we need to do in order to keep everyone safe, but for the most part we hope we everyone can enjoy themselves,” Wood says. “Also, we are genuinely curious as to who is coming this year!”

Wood has some bands she’d like to see announced on this year’s lineup.

“Personally, I’m a big fan of emo and pop punk, so I would love to see Panic! At The Disco. My first concert ever was Hawthorne Heights, Fall Out Boy and All American Rejects, so I wouldn’t mind reliving those days with any of those ‘older bands,’” she shares. “Also Escape the Fate put on a great show last year, so it be great to see an encore.”

She’s not the only one on the force who enjoys Warped either.

“Several members of our department also enjoy working at Warped Tour, even the ones who don’t know the music,” she says. “It’s usually a nice day, and we get to work outside. The vast majority of the fans are awesome and make working the event fun. Besides, there is no better people-watching than Warped Tour!”

Let us know who you are hoping to hear announced on March 22 in the comments!