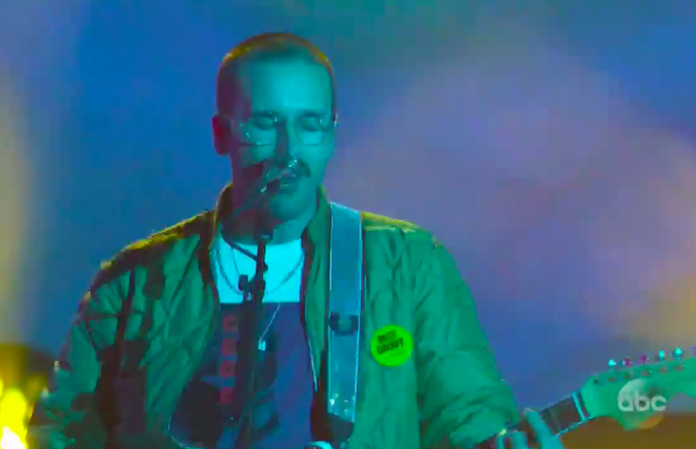 Leave it to Portugal. The Man to basically troll the American Music Awards during their performance of “Feel It Still.”

Read more: Did Linkin Park get kicked out of the AMAs after they won?

The Portland, Oregon-based band made the bold, hilarious move, using their backdrop to make a statement: “No computer here, just live instruments.”

Portugal. The Man really just put a message before their performance at the #AMAs and it said “No computers up here, just live instruments.” The tea really has been spilled

Portugal. The Man have had an insane year. Not only did the band hit No. 1 on the Alternative chart for 17 weeks with “Feel It Still,” off their latest album, Woodstock; but they're also just one week away from adding “Most Weeks at No. 1 on Alternative Songs” to its already impressive list of accolades.

As successful as they've been this year, most people watching the AMAs either a) didn't even know who they were or b) had many questions about frontman and vocalist, John Gourley.

I am BEYOND baffled about Portugal The Man right now. That’s been a dude signing the whole time?

ur telling me that this Portugal the man group has dominated the charts? who even are they

Kip? Is that you? #AMAs pic.twitter.com/UPmyDPaefw

Is it just me or does Portugal. The Man look an awful lot like Kip from Napoleon Dynamite? #AMAs #

Despite that, the band did get the kudos they deserved:

crazy how portugal the man is holding notes better than some singers from tonight pic.twitter.com/7oIbZJXE0v

Portugal. The man has been the best thing I’ve seen so far on the #AMAs and did that just say meet them at Wilshire Blvd for drinks??

And to top it all off, they invited the entire AMAs audience to drink with them: