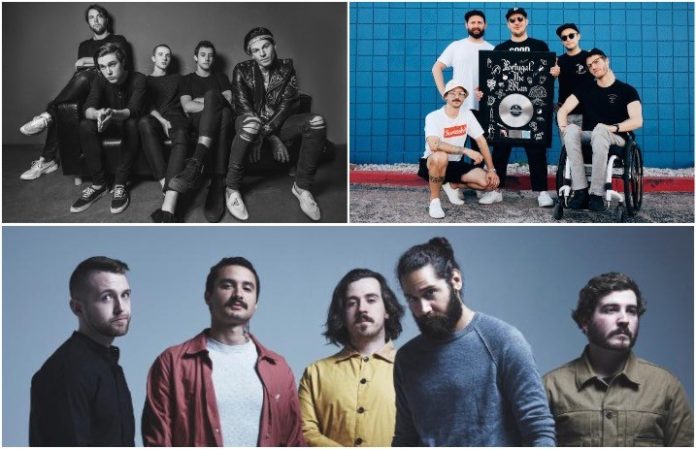 Portugal. The Man performed “Live In The Moment” on Colbert—plus, Don Broco added new tour dates. Check out the news you might have missed today below!

Read more: Hear Fall Out Boy’s cover of Whitney Houston’s “I Wanna Dance With Somebody”

1. Portugal. The Man performed on Colbert

Portugal. The Man performed “Live In The Moment” on Colbert last night. They were accompanied by a children’s chorus and a drumline for the incredible performance.

#tmAnnounced @DONBROCO have announce new dates for April & May after finishing their huge sold out tour! Tix on sale Friday: https://t.co/iJJfmqHGa4 pic.twitter.com/1V4QCPqgtV

A huge thanks to everyone who has picked up our new album, your support has been amazing. We can’t wait to play these songs live. Full list of dates can be found at https://t.co/RIcoaZgC0K pic.twitter.com/cTcZfR6wo0

Good Tiger announced the “Salt Of The East Coast” tour this spring. Accompanying them will be Icarus The Owl and Megosh. Buy tickets here, and check out dates and cities above.

Old Wounds are hitting the Pacific Coast on tour this spring. Supporting acts will be Vamachara, Vatican and Heavens Die.

Yo we thought we should probably play some shows or something so you can all listen to this new album live. Joining us will be our friends in Better Baes (@betterdaysband). Mark will play the shows that sell out in drag. See ya there. TICKETS ON SALE NOW! Check out our website ��

Milestones will be on tour performing their new album, Red Light. Check out the tracklisting below.

Hold onto your hats, kids. Emo Nite is adding more dates to their tour this year.

Born A New just released a new video for “Death’s Penalty,” featuring Travis Tabron of Varials. This track is from their recent EP, Peace Is Dead.

9. Hop Along dropped a new single

Hop Along released a new single “Not Abel,” taken from their upcoming album, Bark Your Head Off, Dog, due out April 6.

10. The Neighbourhood performed on The Late Late Show