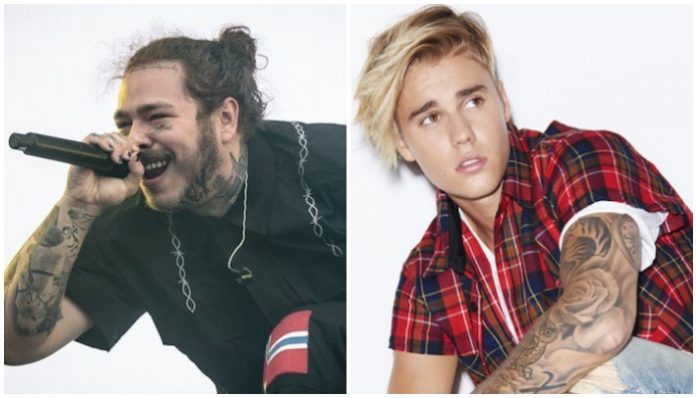 Post Malone had an incredibly busy 2019. Now, it looks like 2020 is slated to be just as busy. The genre crossover rapper is reportedly going to be a featured performer on Justin Bieber‘s new album due out later this year.

In addition to Posty, Coachella headliner Travis Scott is rumored to feature on the album as well.

A few days ago, Justin Bieber announced a massive tour in May and teased a new album. Just yesterday, he dropped his first solo song since his 2015 album Purpose. The song is called “Yummy” and you can listen to it below.

According to TMZ sources close to Bieber reported that Post Malone and Travis Scott collaborated on the upcoming album. Bieber’s end of the work is finished and they’re just waiting for Malone’s vocals according to one source.

Posty has a great track record of collaborations. His most recent album Hollywood’s Bleeding features collabs with Halsey, Ozzy Osbourne, SZA and more.

Bieber’s new album is expected out in March, but very few details are confirmed. The only thing we know for sure is that any song with Post Malone on it will be fire.

In late December, Posty dropped a surprise video for “Circles”.

Yes, “Circles” already has one official video and a Spotify one. This new animated one seems to better fit the song. It keeps some of the fantastical themes of the first video, however.

But, we are also treated to animations of Posty doing the things he likes doing. A trippy display of circles presents all of the images.

Just over two weeks ago, Post Malone teamed up with Spotify to launch a video for “Circles” that requited two phones to watch. Three months ago, he dropped the first video. While the first video has some beautiful cinematography and features epic, fantastical elements, the newest one seems to take the cake.

Malone is ripping cigarettes and playing beer pong is classic. He’s driving a sports car and a knight is riding a horse. The trippy part of the video is that it’s all viewed in a series of circles. Watch it below to see what we mean.

What do you think of a Post Malone and Justin Bieber collaboration? Sound off below!