Post Malone recently opened up about his tattoos, including the few he has on his face. Along with getting an accidental Marshmello tattoo, the rapper also reveals which piece was inspired by late artist Lil Peep.

Though the video was short, he went into detail about how pop artist Justin Bieber was an inspiration for getting any art in the first place.

The rapper recently got a hammer, a bloody buzzsaw and a giant gauntlet with a flail on his face. Those three all occurred within just two months.

In a recent interview, he broached the topic of his face tattoos with a bit of self-deprecating humor.

“It does maybe come from a place of insecurity, to where I don’t like how I look, so I’m going to put something cool on there so I can look at myself and say, ‘You look cool, kid,’ and have a modicum of self-confidence, when it comes to my appearance,” says Malone.

In a recent interview with GQ, Post goes into a little more detail of the reasoning behind his tattoos.

The video begins with a clip from the first time Post Malone talked about his tattoos with GQ when he said he might get a sword on his face. Then it goes to a more recent shot of Posty saying “So, I got the sword on my face.”

“Swords are f—-n awesome,” he states. “I’ve always been into them since [I was] a little kid, so I figured ‘What better [way to] make my mom than a nice big claymore on my face.”

He also expands his thoughts on how he thinks the face tattoos make him look.

“I feel like the face tattoos make me interesting to look at. Where I might lack in handsomeness, I make up for in intrigue. I think it looks dope, I think I look [like] me.”

“Whenever I look in a mirror, I look at myself and it’s not even like they’re there,” Malone continues. “It’s weird. Then whenever I get drunk and look at it, it’s like “Whoa, I have all these tattoos all over my face.

He also says Lil Peep’s “Cry Baby” tattoo inspired his own “Stay Away” tattoo above his eyebrow saying, “I thought it was tough as sh**. I picked one of my favorite Nirvana songs and just put it on my face.”

He goes on to reveal the other ideas behind his artwork such as the card on his forehead, his accidental Marshmello piece and “Always Tired” below his eyes.

“I don’t think I have any regrets, tattoo-wise,” he concludes. “It’s all a time and a moment, if you want to get one, don’t let your friends stop you… Advice for you’re first face tattoo is: F— yea, get after it.”

Post Malone is finishing up the last leg of the Runaway tour with Swae Lee. Tickets are available here and a remaining list of dates is below.

What are your thoughts on Post Malone’s tattoos? Sound off in the comments below! 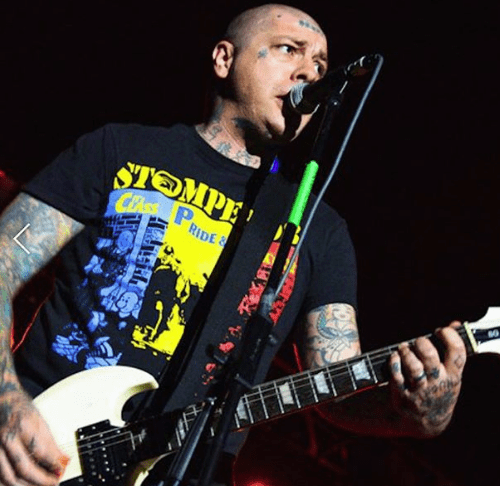