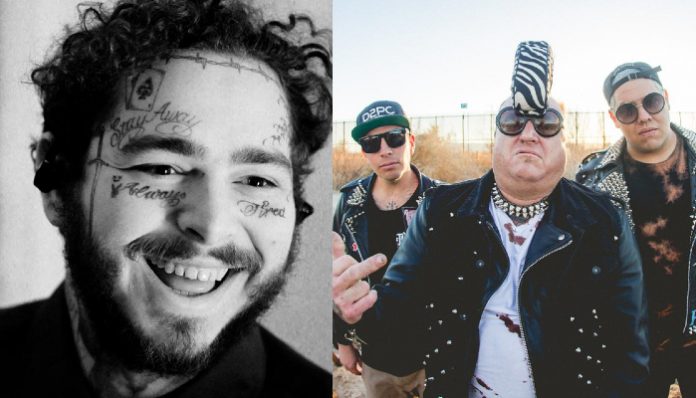 After announcing an upcoming performance in partnership with Bud Light and a limited merch collection, Post Malone has confirmed he’ll be playing alongside Sublime With Rome.

The rapper took to Twitter today (Aug 2) to confirm the performance with the rebirthed version of the ska legends opening the show.

The Bud Light Dive Bar Tour in New York City will be headlined by Malone for the second year in a row on Monday.

playing with @Sublimewithrome at this years @budlight dive bar tour! see you there:))

He performed a new song as part of the series last year in Nashville, and it sounds like this year we’ll be getting the same thing.

“The last Dive Bar show in Nashville was super fun. I’m excited to do the next one in the legendary New York City,” Post Malone said in a release.

Then, Bud Light tweeted that he will be giving us “BRAND NEW MUSIC”.

CLICK BELOW to set a reminder to watch @PostMalone LIVE on the #DiveBarTour stage on 8/5 with BRAND NEW MUSIC. You don’t want to miss this one! 👇👇👇https://t.co/tKdKRqyMCU

Don’t worry if you can’t make it out to the show though since there will be a livestream available.

Post and Bud Light are going all-in on their partnership too, with a full merch collection to coincide with the show announcement.

“It’s cool to be able to grow my relationship with Bud Light and collaborate on a merch collection with them,” Post told Complex. “Feels good to give the fans something that represents a good-ass time.”

You can see the merch collection here.

What do you think of Post Malone performing with Sublime With Rome? Let us know in the comments below.