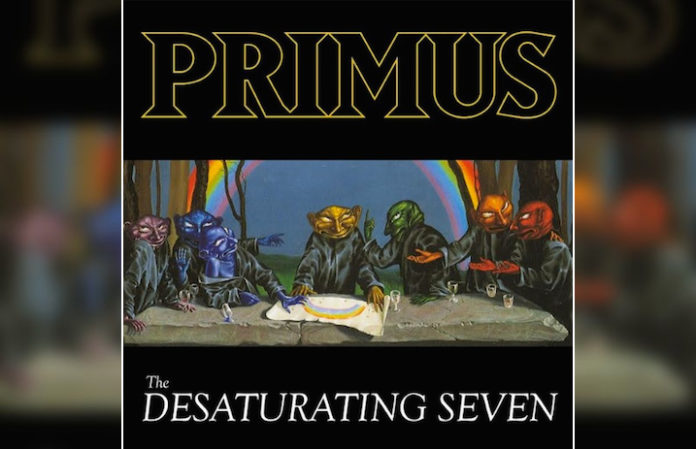 Primus are back with their first new song in six years, “The Seven”—listen below! The tune is taken from the band's upcoming album, The Desaturating Seven, out September 29 on ATO Records (via Consequence Of Sound)

The Desaturing Seven is Primus' first studio album of all new material in six years, following 2011's Green Naugahyde (and 2014's soundtrack re-imagining Primus & The Chocolate Factory With The Fungi Ensemble). Metal Injection reports that the new record will be the band's first since 1995's Tales From The Punchbowl to feature the “classic” Primus lineup of bassist-vocalist Les Claypool with guitarist Larry LaLonde and drummer Tim Alexander.

The new album is reportedly based around the theme of a 1970s children's book called The Rainbow Goblins that Claypool read to his kids. The bassist describes the book's vivid symbolism as the origin of The Desaturating Seven:

“The dark imagery and beauty of the art struck me immediately and I thought, 'This would make good fodder for a piece of music.' The use of color and darkness both in the paintings and the writing was compelling and now, near two decades later, the metaphor of greed, gluttony, and deceit vs. unity of the masses is eerily relevant. I brought the notion to the Primus guys and they were all for it. Plus, I figured it's about time someone brought ‘Goblin Rock’ back to the fold.”

Check out Primus' comeback track “The Seven” right here, and see the band's tour dates after the new song—the band are on the road right now with Clutch and continue their U.S. trek through the end of the year.