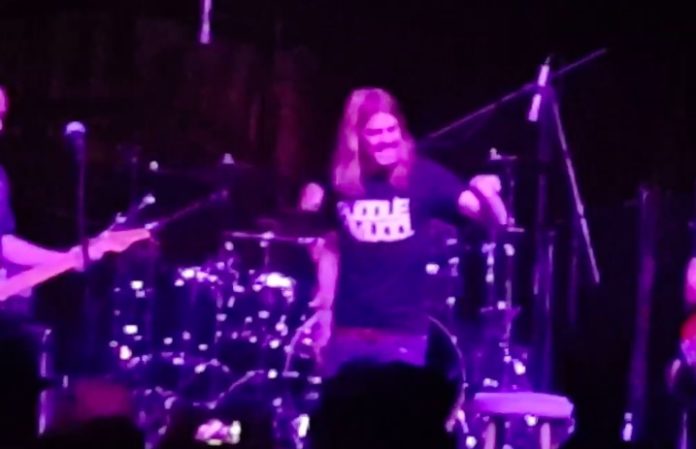 Puddle Of Mudd singer Wes Scantlin offered an on-stage tribute to late Slipknot bassist Paul Gray at their March 4 show in Lynchburg, VA—and it was a bit odd, (via Loudwire).

See footage from the scene below (Scantlin starts talking at 7:18).

Read more: Puddle Of Mudd frontman loses it mid-set, calls out fan for “stealing his house”

Here's what happened: Scantlin was performing Puddle Of Mudd's hit “Blurry,” during which he started singing Stone Sour's “Through Glass.” He went on to say: “Stone Sour! Slipknot! Force to be reckoned with! I love you guys, man. Oh my god, thank you very much Corey [Taylor] and the rest of the band.”

Back in 2013, Scantlin was arrested for buzz-sawing and sledge-hammering a neighbor's property. Later, in January 2015, Scantlin was arrested again—this time for riding an airport's baggage carousel. He was then arrested in July 2015 after a 100 mph police chase. He was later involved in a police standoff. He's also walked off stage and got arrested and smashed his gear mid-performance.