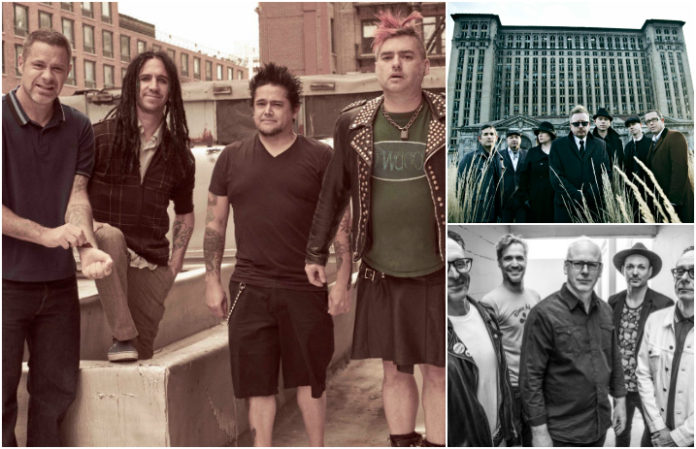 NOFX's Fat Mike is bringing his Punk In Drublic Craft Beer & Music Festival to five spots across the U.S. this fall—check out the dates below! The city-by-city lineups feature NOFX along with Flogging Molly or Bad Religion.

The beer and music fest launches September 16 in Tacoma, Washington, with stops in Boise, Idaho, and Concord, Sacramento, and Huntington Beach, California. NOFX will co-headline each date. The Tacoma and Boise stops will feature NOFX alongside Bad Religion, Goldfinger, Less Than Jake, Bad Cop/Bad Cop and more. Be on the lookout for complete lineup announcements for the ensuing dates at www.PunkInDrublicFest.com.

Fat Mike has teamed up with Synergy Global Entertainment and Brew Ha Ha Productions for the festival. In addition, Mike and Stone Brewing will release a limited edition beer called Stone & NOFX Punk In Drublic Hoppy Lager, available in cans only in the Punk In Drublic festival markets!

When asked how the Punk in Drublic Hoppy Lager tastes, Fat Mike says, “It's something to wash the noise away.” Other slogans from Fat Mike were apparently offered: “They say you can’t get beer from a stone,” Mike adds of his beverage collab with Stone Brewing. “Oh shit, we just did!”

“We know we're crazy for letting Fat Mike in our brewery, but we're doing it anyway,” says Stone Brewing co-founder Greg Koch. “We have a lot in common in not only refusing to follow the status quo, but actively rejecting it. I have incredible respect for what he and Fat Wreck Chords have done for the independent music scene. Craft beer is currently in a similar open-your-eyes-to-the-man's-corporate-obfuscation battle. Is independent craft beer punk rock? Very. And even more so now with this collab. See you in the pit!”