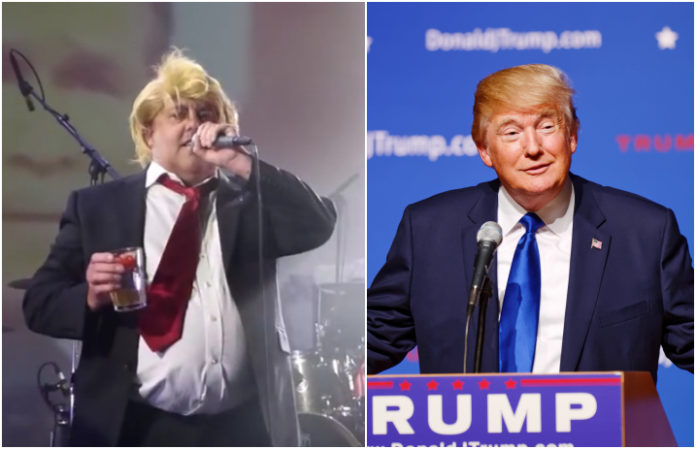 According to Entertainment Weekly, Peter And The Test Tube Babies singer Peter Bywaters was not deported nor was he denied entry due to “mocking” President Trump (as detailed below). He had the wrong visa. See the statement below from CBP spokesman Jaime Ruiz, who spoke with EW.

EW reports that Bywaters did not disclose his intention to perform at a festival during his trip and did not have a P1 visa.

The lead singer of punk band Peter and the Test Tube Babies was reportedly refused entry to the United States last week for previously mocking President Donald Trump, according to a news story published by TeamRock.

Peter Bywaters, the frontman for the English punk-rock group, was apparently en route to California's Punk Invasion festival on Saturday to perform with the band. Upon landing in San Francisco, Bywaters was reportedly interrogated for six hours after being accosted by customs and border protection officers.

Bywaters, according to his own account, was confronted with video and photos of himself acrimoniously dressed as Trump and speaking out against the president during the band's tour of Germany last year, The Jinx Presidential Tour 2016. See some footage of the band's Trump-mocking live performance below.

“I had only been there 30 seconds when the customs and border control guard swung his screen round and said, 'Is this you?'” Bywaters tells TeamRock. “There in full view was a video from last year's German tour with me dressed as Donald Trump, smoking a fake joint. From there, it all went down hill. Six hours later, I was forcibly escorted to my seat on the plane.”

Bywaters was reportedly photographed, finger printed, swabbed for DNA, and made to sign a sworn statement before he was allowed to board a return flight to England. The vocalist also says his passport and cell phone were confiscated, though both items were seemingly returned to him on re-arrival in London.

“Oh well,” says Bywaters, “I expect to still be the singer of Peter and the Test Tube Babies by the end of the year. Will Trump still be president by the end of the summer? … A U.S. tour or festival will never ever happen again!”

Pete and the Test Tube Babies' set at Punk Invasion apparently went ahead with the aid of fill-in singers. (See the band's Facebook post regarding Bywaters' denied entry and subsequent festival guest vocalists below.) The group have a new album coming out on September 15, That Shallot, which features Rancid's Lars Frederiksen on the single “Crap Californian Punk Band.”

Watch more: If I Ruled The World: ANDY BIERSACK