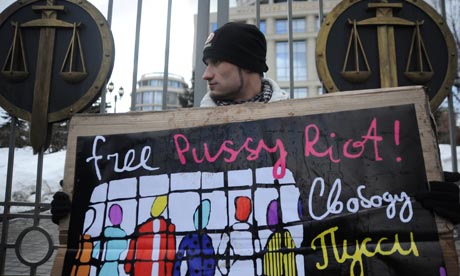 A new update on the ongoing story of Russian feminist punk group Pussy Riot, a group in which members are currently incarcerated and awaiting trial on charges of hooliganism for a Feb. 21 performance at Cathedral of Christ the Saviour: Patriarch Kirill, head of the Russian Orthodox Church, has come out and claimed the three women in the group were doing the devil's work. According to the Guardian:

“Patriarch Kirill said that 'the devil laughed at us' when Pussy Riot performed their song Virgin Mary, Mother of God, Expel Putin! in the Cathedral of Christ the Saviour less than a fortnight before presidential elections.

Three alleged members of Pussy Riot, who wear colourful balaclavas to hide their identities, have been arrested since the 'punk prayer.' They remain in prison awaiting trial on hooliganism charges and deny taking part in the 21 February show. All face sentences of up to seven years.

Patriarch Kirill appeared annoyed by calls for leniency. There were people who sought to 'justify and downplay this sacrilege', he said. 'My heart breaks from bitterness that amongst these people there are those who call themselves Orthodox.'

It's worth nothing that many members of the Orthodox church are calling for leniency, even sending an open letter to the patricarch suggesting that he “maintain a Christian attitude.”

What do you think of the church's comments? Let us know in the comments.