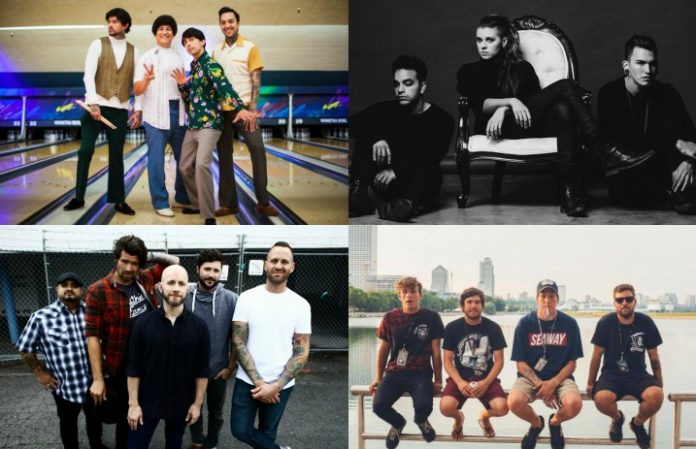 A performance by PVRIS, behind-the-scenes video by Pierce The Veil and a ton more new videos—it was an awesome Friday! Check out the news you might have missed today below!

Read more: Between the Buried and Me reveal tour plans and other news you missed today

PVRIS have just been announced to take the stage and perform at the MTV Woodies March 16 from Austin, Texas during South by Southwest Music Festival. The MTV Woodies is a yearly event that spotlights an eclectic roster of emerging artists across musical genres. The event will air on MTV Live and be available online here. Before to the Woodies, PVRIS will perform at the Tumblr Planned Parenthood event on Sunday, March 12 and Pandora’s party on Monday, March 13.

The video takes fans behind the scenes of the band making GIFs with Giphy and the day “Floral & Fading” premiered. PTV are currently wrapping up the Rest In Space Tour and recently announced a spring tour with Sum 41.

The fund will be hosted by Stranger Things actor Finn Wolfhard and benefit Sweet Relief Musicians Fund. It'll be held May 14 at the Fonda Theater with appearances by Taking Back Sunday, Anthrax, Sugarcult, Ok Go, Tenacious D and more. Tickets and the full list of artists can be viewed here.

The Philly band's “Letterbox” comes off of their latest album I'll Never Be Okay, I'll Never Be The Same, released March 3 on Jump Start Records You can grab the album here.

The new song comes off of Body Count's new album Blood Lust, out March 30. About the song, frontman Ice-T said: “I was noticing people on the streets showing off their expensive jewelry and money on social media. They are just making themselves a target for the robbers out there just watching their Instagram to see what they are flaunting. In L.A., they call Instagram ‘Jacker’s Uber,’ seeing what clubs people are at and livestream the robbers to their front door.”

The Pittsburgh, PA rock band's first album was released in 2015 and features a song with Johnny Craig. You can download “Starboy” here.

LeAnder release “Feel It In My Bones” video.

The Nashville-based band are currently on tour and you can grab tickets here. Their debut EP, Invictus came out last year. You can stream it here.

The song comes from their forthcoming album, The Great Collapse, out March 17 via Entertainment One (eOne) / Good Fight Music—preoder it here. The band's currently on tour with After The Burial, Emmure and Fit For A King.

About the video, frontman Tony Duggins says, “I wanted to tell the story of Irish immigration I’ve heard all my life. “A story of racism, rejection, and how they overcame the obstacles, and I think that reflects kind of what’s going on now.” The song comes from the band's latest album, Smash The Windows, available everywhere now.