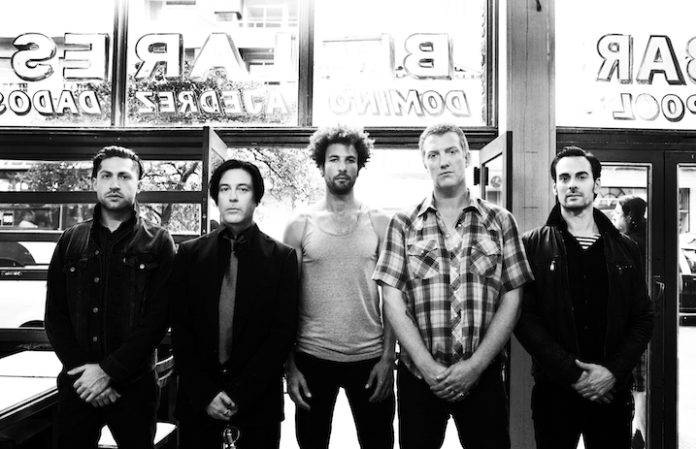 Queens Of The Stone Age frontman Josh Homme kicked a female photographer in the face during the band's performance at KROQ Acoustic Christmas yesterday.

The victim was Shutterstock photographer Chelsea Lauren. She told Variety that the “incident was unprovoked” and that “Homme was even smiling before he struck her.”

“It was obviously very intentional,” she said.

“Josh was coming over and I was pretty excited, I’ve never actually photographed Queens Of The Stone Age before, I was really looking forward to it. I saw him coming over and I was shooting away,” Lauren stated. “The next thing I know his foot connects with my camera and my camera connects with my face, really hard. He looked straight at me, swung his leg back pretty hard and full-blown kicked me in the face. He continued performing, I was startled, I kind of stopped looking at him, I just got down and was holding my face because it hurt so badly.”

Lauren was able to return to the pit to shoot Thirty Seconds To Mars and Muse after the incident, but went for treatment later that night at Cedars-Sinai Medical Center. Many have encouraged her to press charges, including a social worker at the hospital. She planned to file a police report today.

“I feel like if I don’t do anything, he gets to kick people in the face and not get in trouble because he’s a musician,” Lauren explained. “That’s not right.”

Many have questioned if Homme was under the influence of drugs or alcohol during the performance due to his violent and disturbing behavior. Minutes after kicking Lauren, he took out what appeared to be a knife and cut his forehead, dripping blood during the rest of the show. He also called the sold-out audience “retards,” encouraged them to boo him and told them to take their pants off before stating, “I want to give you all a night you’ll never remember.” He even insulted headliners Muse, exclaiming “Fuck Muse!”

Despite the incident, Lauren plans to return to the Forum today to shoot the final night of KROQ's Christmas show which includes the Killers, Weezer and Phoenix.

Thank you everyone that has reached out with supportive messages. A small update, as I'm being flooded with questions: My neck is a sore, my eyebrow bruised and I'm a bit nauseous. The doctor released me early in the morning. Here are three images. Two of them as Josh looked at me, smiled and then kicked me. The other one is later after he cut his own face with a knife. I was in the pit in tears – and he just stared at me smiling. Assault in any form is not okay, no matter what the reasoning. Alcohol and drugs are no excuse. I was where I was allowed to be, I was not breaking any rules. I was simply trying to do my job. I hold nobody accountable for this but Josh himself. KROQ has nothing to do with this and I will always support them. The irony is someone had thrown an ice cube on to the very slick catwalk before the QOTSA set. I was afraid that one of the band members might slip and hurt themselves so, when the lights went dark, I used my arm to wipe down the runway so nobody would hurt themselves. Thank you to @variety for their immediate concern and care with this matter. As of now, nobody from QOTSA has reached out to me. #queensofthestoneage #QOTSA #JoshHomme

Homme has issued a statement regarding the incident on Twitter: