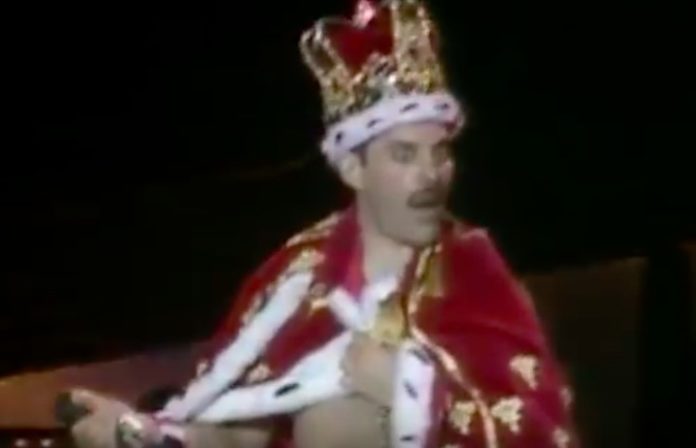 Thanks to an announcement on Queen's official website, we now know for certain that a Freddie Mercury biopic, starring Mr. Robot's Rami Malek, is now in the works! And it's been given a very appropriate title: Bohemian Rhapsody.

According to the announcement, Bryan Singer will direct the film. His other works include the X-Men films and The Usual Suspects. Pre-production will begin next week in the UK.

Read more: Someone isolated Freddie Mercury’s vocals from Queen’s “We Are The Champions”

Fittingly, Roger Taylor and Brian May of Queen will serve as the film's music producers, but there's no news yet as to who will play those two and John Deacon in the film.

Read the entire announcement below:

“Yes folks, it IS finally happening.  You’ve been hearing rumours about Bohemian Rhapsody The Film for some time, but now QOL is about to become your most direct source of official information.  This will be the place to come to stay ahead of all the very latest news and updates as the film gets underway – and hopefully we’ll have some regular insider information to share with you too.

So starting right now, here's what we can confirm at this stage.

Award winning director Bryan Singer is the man who will be bringing the Queen and Freddie story alive. If you’ve ever seen Singer’s X-Men films, or the groundbreaking movie The Usual Suspects, you’ll know this is a director with extraordinary imagination and style. A perfect choice to recreate the fabulous Queen years which brought us such unforgettable moments as Live Aid, which we can reveal will be faithfully recreated for a key sequence the film. More on that very soon.

Rami Malek has signed up to take on the challenging rôle of Freddie Mercury.  Who could imagine a more perfect fit than this brilliant actor ? At this stage you probably know him best for TV’s Mr Robot.  Roger and Brian told QOL: “Rami has great presence and he’s utterly dedicated to the project. He’s completely  living and breathing Freddie already, which is wonderful.”

Roger and Brian of course are serving as the film’s executive music producers.

After months of speculation, QOL can also confirm that the film is now ‘as-close-as-that’ to start of shooting.  Pre-production begins next week in the UK to prepare for start of principal photography in around London as soon as mid-September.

You are probably wondering, who will play Roger, Brian and John???  That, friends, is news for another day, and just one good reason for you to make QOL and Queen Facebook your regular stops to check in for the very latest updates, and who, knows, maybe even one or two exclusives.

Come back soon. You don’t know what you might be missing. Hint: Fancy being in the film?”

Who knows—with the sound of that last sentence, you could be in the film! Are you excited for Bohemian Rhapsody? Let us know in the comments.