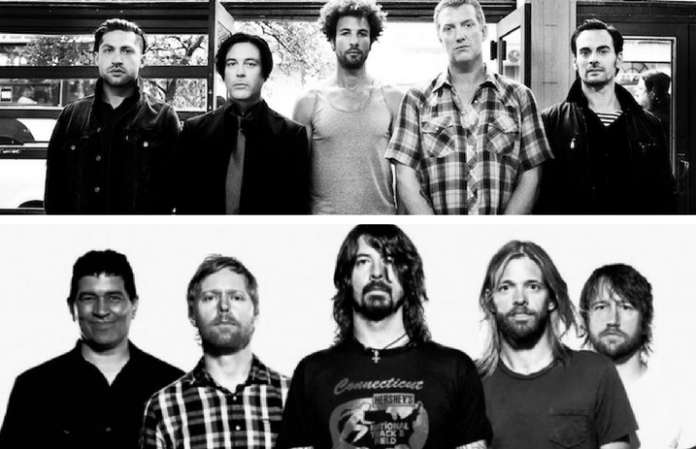 Joshua Homme and Dave Grohl are teaming up again! No, sadly it's not for a new Them Crooked Vultures album. It's still great news, though. Foo Fighters and Queens Of The Stone Age will be joining forces for several upcoming stadium shows in South America next year.

Read more: Foo Fighters release statement after hundreds of fans were turned away from London show

With Foo Fighters touring in support of their new album Concrete And Gold and Queens of the Stone Age traveling around the world for their recently-released Villains, it's going to be a double-header of awesome. The set of larger-than-life shows will begin Feb. 25, 2018, but you can pre-register for tickets right now. Probably a good idea, as this is the kind of thing that sells out almost immediately, especially with both bands' massive fan bases in mind.

Brazil! More ticket info soon! Fans can register for a chance to purchase tickets before anyone else. Details here: https://t.co/ISnigmwQXE pic.twitter.com/TcliWidXfD

North American fans will have to settle for October 7's CAL JAM 17, where the two bands are rocking out together in San Bernardino, California. Both Foo Fighters and Queens Of The Stone Age are finishing up world tours around the globe throughout the rest of 2017 and into 2018, so if you can find a local gig on the list that's still got tickets, you might want to snap it up since next year's shows are probably going to be a very, very long way away from you.

Queens Of The Stone Age and Foo Fighters' upcoming tour dates can be seen below, so you can still plan a show if you've got some cash burning a hole in your pocket.