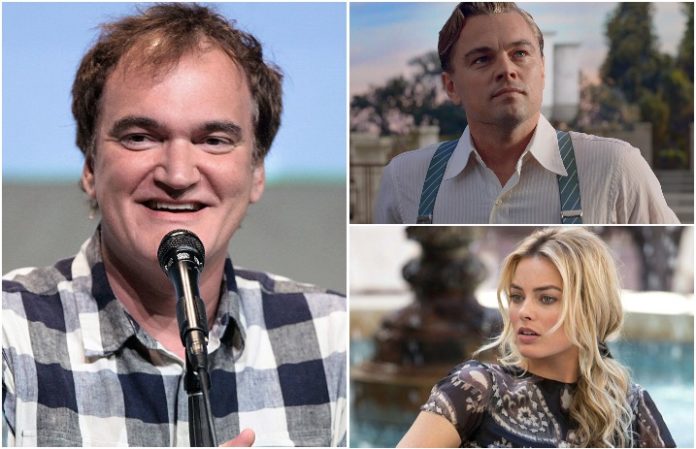 For a movie that hasn't even started production yet, Quentin Tarantino has certainly made many headlines with his Charles Manson themed movie, Once Upon a Time In Hollywood.

At a recent appearance at CinemaCon in Las Vegas, the director shared that his Manson-themed film is “the closest to Pulp Fiction that I have done.” The director also shared the the film's lead actors, Leonard DiCaprio and Brad Pitt, have “the most exciting star dynamic since Paul Newman and Robert Redford,” per a report from The Hollywood Reporter.

Dicaprio, who was also at the convention alongside Tarantino, added: “It’s hard to speak about a film that we haven't done yet, but I’m incredibly excited…to work with Brad Pitt, and I think he’s going to transport us. I’m a huge fan of Singin' in the Rain—movies about Hollywood. As an L.A. native, having read the script, it’s one of the most amazing screenplays. We are going to do our best job to make it fantastic.”

Yeah, it's safe to say we're just as excited about Dicaprio about this film. While everyone is in high spirits about the upcoming film, Tarantino is opting to keep the film's overall plot pretty quiet, saying:

“It's very hush-hush and top secret. But I can tell you that Once Upon a Time in Hollywood takes place in 1969, at the height of the counterculture hippie revolution and the height of new Hollywood. Street by street, block by block, we'll transform Los Angeles into the Hollywood of 1969.”

While there's still not a whole lot in regards to the movie, especially because it's still in its very early stages of production, we do know a few key pieces about the upcoming film.

As previously reported, Pitt and DiCaprio are taking on the two lead roles. DiCaprio is set to play Rick Dalton, a “former star of a western TV series,” while Pitt will play Cliff Booth, who is Dalton’s “longtime stunt double.” The two characters are “struggling to make it in a Hollywood they don’t recognize anymore. But Rick has a very famous next-door neighbor… Sharon Tate.”

We also know that Margot Robbie is in talks to join the Once Upon A Time In Hollywood cast to play Sharon Tate. While the star isn't officially confirmed, she is said to be in final negoitations.

The film is scheduled to be released Aug. 9, 2019 which also marks the 50th anniversary of the murders of Tate and her friends by Manson's followers.