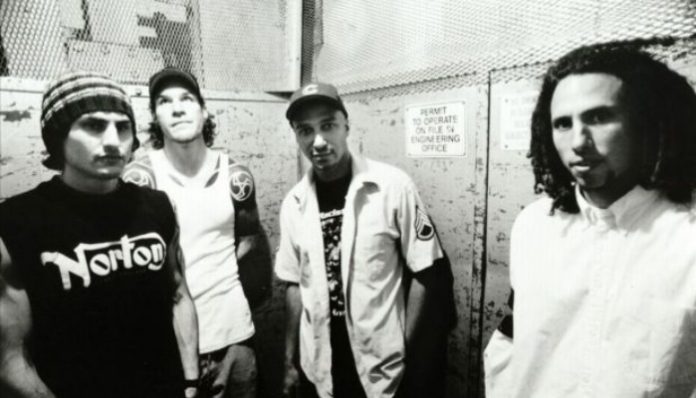 We’re a few weeks out from the news that Rage Against The Machine reunited. Following a confirmed handful of dates including Coachella, it looks like more shows have leaked.

The official Rage Against The Machine Instagram account—the same one that first brought us reunion news—reportedly posted a tour poster and quickly deleted it over the weekend. You can see the reported screenshot below courtesy of reddit u/Mind-Mischief.

Since the alleged posting, the image has made the rounds on Twitter and Instagram. Among the dates are the already confirmed El Paso, Texas; Las Cruces, New Mexico; Phoenix, Arizona and Coachella dates.

The new alleged dates have added Hellfest, Riot Fest, Louder Than Life, Rock In Rio and more. You can see the alleged poster below along with the dates included on it. 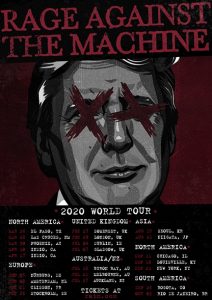 Neither the band nor the festivals have confirmed the bookings. However, this post will be updated should a statement be released.

More on Rage Against The Machine

Continuing to use their platform for the greater good, the RATM Instagram account shared an image of the Chile protests as its first post. There, residents were fighting against a raised subway fee and are still seeking income equality. The photo, which was taken by Susana Hidalgo, shows a crowd gathered around the Plaza Baquedano in Santiago.

The demonstrations first began Oct. 18 leading to the death of at least 20 people. Hundreds more have been injured while more than 2000 have been detained, according to the Washington Post.

Guitarist Tom Morello shared the same image on his personal account Oct. 27, writing “Chile is not messing around. USA NEXT?”

Chile is not messing around. USA NEXT? (Repost @war_within_a_breath)

RATM drummer Brad Wilk also posted the image alongside another of the protests on Oct. 27, writing, “Solidarity with the people of Chile using their voices and power in numbers protesting their government and lack of parity. #overonemillion” The image then surfaced again on the newly created @rageagainstthemachine account amid reunion rumors. In addition to crediting the photographer, the caption simply listed off several dates:

Among the dates are two Indio, California stops, which fall in April. Coachella has already announced its 2020 dates, which include two weekends as usual: April 10-12 and April 17-19.

Check out the original post below, which was followed by another tour poster a week later.

After parting ways in 2000, the band released the cover album Renegades in December. A live album, Live At The Grand Olympic Auditorium, was released in 2003 featuring recordings from their final shows in Los Angeles in September 2000.

The band later reunited at Coachella in 2007, stoking the flames of this reunion theory at the time even more for a similar return. You can see a video of that below.

The band played a handful of more shows and festivals throughout the next couple of years. After performing at their own L.A. Rising festival in 2011, Wilk revealed in 2014 that it may have been their final show.

“As far as I know, we played our last show in 2011 at the Coliseum, and if that was our last show, that’s a good way to go out,” Wilk told the Pulse Of Radio. “I had sort of had to put it in my head that that band is over in order for me to just move on with my life, to be honest with you, so that’s kind of where that lies. The Coliseum—awesome way to go out.”

Since the band’s hiatus, the members have pursued other projects with Morello, Wilk and bassist Tim Commerford performing in Prophets Of Rage sans de la Rocha. Forming in 2016, the group released The Party’s Over EP followed by their 2017 self-titled debut. As for de la Rocha, he released an EP under One Day As A Lion on Anti-Epitaph in 2008.

Morello recently addressed the chance of a reunion at Sonic Temple Festival in May. He was asked to cite an example of when musical chemistry resulted in an amazing outcome.

Read more: Tom Morello has “no news” about Rage Against The Machine reunion

“I had some of those riffs that ended up on the first Rage record on a cassette,” he said. “I was jamming with every musician in Hollywood with some of the riffs that would become ‘Bombtrack,’ ‘Freedom,’ ‘Township Rebellion,’ ‘Know Your Enemy.’ They didn’t sound like that until I played with Brad Wilk, Tim Commerford and Zach De La Rocha.”

“The second we were in a room together, it’s something I try not to over-intellectualize. It’s just something that happens,” he continued. “If you really pay attention to it, it’s because I play those huge riffs with a single coil pickup, so my guitar has sort of a springiness to it that’s not very metal. Timmy C. plays with a bass sound that sounds like three Black Sabbath’s playing at once, so it fills up that mid-range. Brad tends to play behind the beat, I play in front of it. Tim plays right on it, so these riffs because these huge sort of slabs of rhythms that is only because of the natural way we play together to the first rehearsal to the last gig.”

Then, after gushing about the band’s chemistry, he mentioned the lack of an update on the RATM front.

“There’s no news on the Rage Against The Machine front,” he said. “The times demand people standing up. That’s what I’m doing with my stuff, what Prophets of Rage is doing. Don’t wait around for Rage Against the Machine. Form your own band and get it done.”