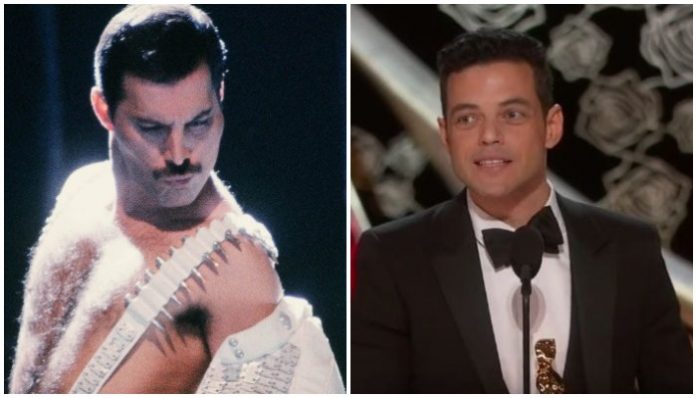 Bohemian Rhapsody star Rami Malek recently spoke about his new role as the villain in the upcoming James Bond film No Time to Die. In the interview, Malek says he took a lot from his experience playing Queen‘s frontman Freddy Mercury.

Everything about building an original character and making it your own, Malek attributes to Mercury in someway.

In a recent interview with Empire, Malek discusses created the villain Safim—his role in the new 007 film.

“If I went in there and tried to make a carbon copy of someone, what joy or fun would that be for anybody?” Malek says. “I guess that may be a lesson I learned from Mr. Mercury. If it’s not original, then why bother?”

“I’ve pocketed some things from some of my favorites,” Malek continues. “But I tried to every day imbue this character with something I thought made sense for the character, but might also at the same time be shocking and unnerving.”

More to the point, Malek is even working with the same dialogue coach he used to capture the speech of the Queen’s frontman. Malek wants to create a distinct villainous voice for his role in No Time to Die.

“I wanted to create something that we couldn’t quite peg from any particular part of the world,” Malek teases.

Considering Malek won an Oscar for his performance as Freddie Mercury, we can assume he knows what he’s talking about.

We learned the news of Malek starring opposite Daniel Craig in the new Bond film back in April.

Malek posted the below tweet teasing he will “make sure Mr. Bond does not have an easy time of it”

A word about #BOND25 from Rami Malek pic.twitter.com/CLJ5mpO9mu

Speaking to Good Morning America, Malek stated that there were a “few things that have happened in my life the last couple of years” that he could not imagine,” when asked if he thought taking on the role of a Bond villain was ever in the cards.

“It’s thrilling,” he said. “So many generations have grown up with these films,” he said, noting that Craig had done an “astounding job” as 007 during his time in the famous suit. This will be the first film in four years since Spectre, so it’s high time for a new one, after all.

Rami Malek is not alone in his thoughts of Freddie Mercury. I’m sure everyone that has grown up listening to Queen can say the same.

How do you think the new James Bond movie will be? Sound off below!