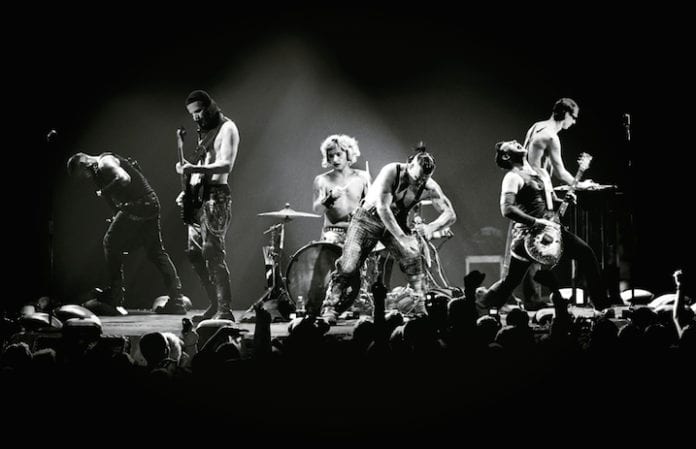 Last we heard from Rammstein, they were checking in from the studio. Big news considering the band’s last album, Liebe Ist Für Alle Da, was released in 2009.

As of this summer, the new album was entering in the “final phase” of production, according to Metal Hammer. Recently, guitarist Paul Landers gave some more insight into the upcoming, untitled album.

Landers told Music Radar that the goal was to have the album put out in spring of 2019.

“Right now, it looks like this new record will be coming out next spring, and what we’ve been mainly doing is playing together in a circle, with all the guys in one room,” Landers says.

The production of the album is different this time around. Instead of being separate during recording, the band are all together. While a change for them, Landers says they are happy with the result.

“It hasn’t been like a pre-production where each member is alone,” Landers says. “It’s been more of an all-together kind of thing. We liked the sound of it so much that we’ve decided to make the record more of a band-unit recording than a bunch of guys playing separately.”

Landers admits that he’s not sure how it will all come out, but he’s excited to see the final product. He hopes the new way of recording the album will bring some of the same energy that their live concerts get.

“We’ll have to see how it all ends up being on the record, but the basic idea is you are hearing a band playing,” Landers says. “You could say it’s inspired by our live sound.”

The upcoming album, so far untitled, will be Rammstein’s seventh studio album and the first album since they reunited in 2015. Back in March, Rammstein revealed that they had “35 songs almost finished” for the album. The news was dropped by guitarist Richard Kruspe in a promotional video for their live Blu-ray/DVD titled Rammstein Paris.

After Liebe Ist Für Alle Da, the band went on hiatus and only reunited in September 2015. Since then, the band have played a number of one-off shows, including a show with Korn and Stone Sour.