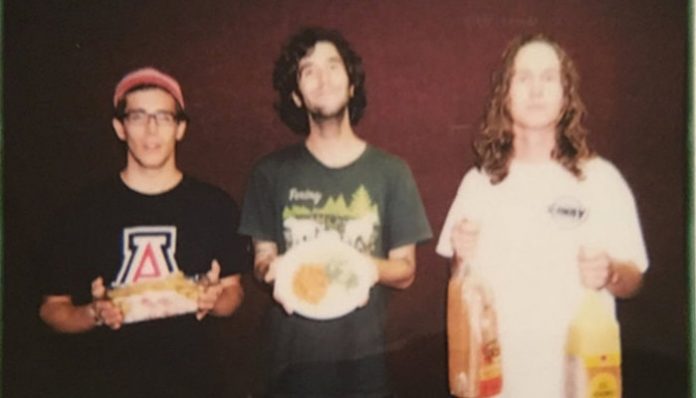 rationale. are back with their first new piece of music since the release of 2019’s You Are Flawed, But You’ll Be Fine.

Over the weekend, they released their reflective new single “Caution & Pressure.”

Read more: It looks like ‘Umbrella Academy’ season 3 is picking up on that cliffhanger

After forging friendships during years of touring together, former Real Friends vocalist Dan Lambton and Knuckle Puck‘s Joe Taylor and Ryan Rumchaks came together to form rationale. Together, they released their EP Confides in 2015 that includes “Hangnail,” “Quarter Life” and more.

Since then, rationale. have continued to steadily put out music over the past few years. In 2019, they released their full-length album You Are Flawed, But You’ll Be Fine. Then, in March 2020, they shared a few demos from the album as part of a 3-track acoustic EP.

rationale. originally planned to release new music earlier this summer. However, due to the coronavirus pandemic and other factors, those plans quickly changed.

“We said new music would be coming soon in the summer,” they say. “Unfortunately due to both world events and personal obligations we felt we should wait. Well…… THIS SUNDAY, NOVEMBER 22ND Y’ALL GET TO HEAR A BRAND SPANKIN’ NEW SINGLE! Times and info listed below!!”

We said new music would be coming soon in the summer. Unfortunately due to both world events and personal obligations we felt we should wait. Well…… THIS SUNDAY, NOVEMBER 22ND Y’ALL GET TO HEAR A BRAND SPANKIN’ NEW SINGLE! Times and info listed below!! https://t.co/tXfh2cWWVJ pic.twitter.com/NXP2xYwoQO

Now, the wait for new music is finally over. rationale. are back with their first new piece of music in 2020 called “Caution & Pressure.” The song is a reflection of a relationship where an individual feels like their partner is trying to change them. Throughout the song, both Lambton and Taylor trade-off on vocals as they sing about past thoughts and feelings during that difficult time.

Read more: Here’s why this ‘How The Grinch Stole Christmas’ theory is dividing fans

Along with “Caution & Pressure,” rationale. confirm on their Bandcamp page that more new music is arriving sometime in 2021.

We also debuted TWO songs from Joe’s upcoming album Bright Black Hole. There’s a limited amount of tapes available and Joe did everything himself, playing, recording, mixing, AND mastering. Pick a tape up and get a free download of CAUTION AND PRESSURE!! https://t.co/8UPFp3noxn

What are your thoughts on rationale.’s new single? Are you ready to hear more new music from them next year? Let us know your thoughts in the comments below.