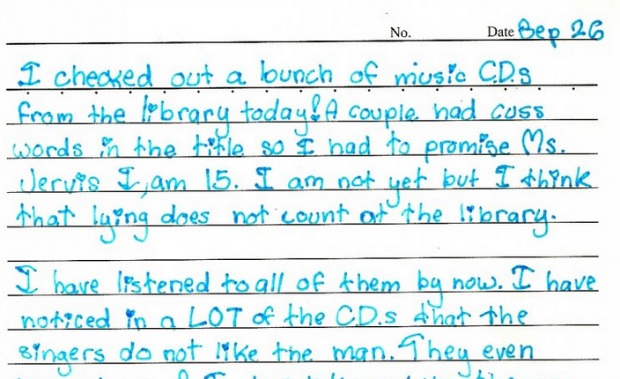 Badass Digest recently dug up this amazing note written by a fifth grader named Taylor-Ruth. In the letter, the young girl writes about how she “checked out a bunch of music CDs from the library.” She then noted that a lot of the music has cuss words and the singers “do not like the man.” Classic punk.

“I do not know who the man is,” she continued, “maybe it’s Bush or the singer’s principal.” My god, that’s adorable! As it turns out, she didn’t just discover random albums from the library—she found punk albums. The girl eventually writes about her love for San Francisco hardcore punks Dead Kennedys.

The best line from the letter (aside from any part where the “i”s are dotted with hearts) is: “Lying does not count at the library.” Read the full message below:

Vanyaland did some digging and reports that Taylor-Ruth is now 20 years old:

“A 20-year-old from Indianapolis named Taylor-Ruth has a much cooler story — discovering Dead Kennedys at the library when she was in 5th grade, and on September 26 of that year she sat down to write pretty much the best grade-school letter anyone has ever written. Though the note was posted to her tumblr last year, it was recently retweeted by Jason Isbell, and the other day Devin Faraci of Badass Digest did some sleuthing to piece it all together.”