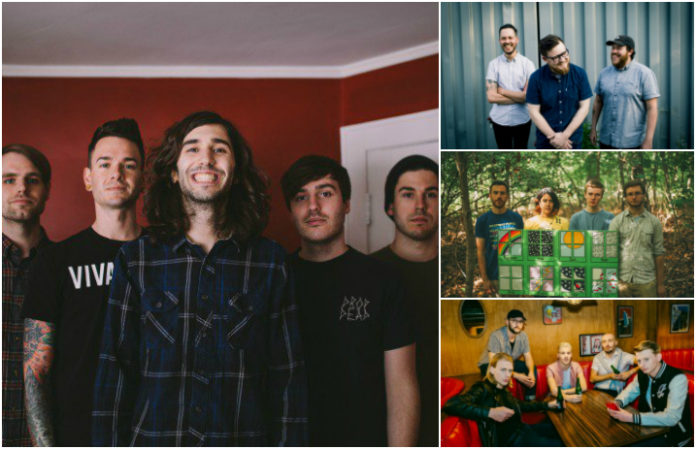 Catch Real Friends, Northbound and more on tour—plus hear new songs from Dead Leaves and The World Is A Beautiful Place & I Am No Longer Afraid To Die. Check out the news you might have missed today below!

Read more: Luke Holland shares Halsey drum cover and other news you might have missed today

1. Real Friends have announced a short run of tour dates for this September.

They’ll be making two stops in Ohio, with support from Jetty Bones—one Sept. 11 in Columbus, and one Sept. 12 in Toledo. Get your tickets here!

Playing a couple rock shows in September | get tickets at https://t.co/G8g7iSWtRM pic.twitter.com/zdHuaWkkvX

2. As It Is released a special acoustic version of their song “Hey Rachel.”

The emotional song is taken from their most recent album okay.

Read more: A girl sang Bring Me The Horizon’s “Can You Feel My Heart” on ‘The Voice,’ Oli Sykes approves

3. Snowed In announced their epic lineup, with Pinegrove headlining—and so many other incredible bands performing as well.

Pop by the Agora in Cleveland, OH on Nov. 25 to catch PUP, Diet Cig, Adult Mom, Swordfish, Dead Leaves and more! Get your tickets here, available 10 a.m. Aug. 3, and check out the full lineup below!

4. Dead Leaves debuted their new song, “Alive In The Spring.”

The track is taken from their forthcoming EP, Vultures, set to make its debut Aug. 25 via Take This To Heart Records. It’s available for preorder here.

5. Northbound announced a string of tour dates for next month. Check them out below!

They’ll be supported by the Blonde Tongues for the August run.

6. The World Is A Beautiful Place & I Am No Longer Afraid To Die announced their new full-length record, Always Foreign and released its debut single, “Dillon And Her Son.”

Their record is due out Sept. 29 via Epitaph, following 2015’s Harmlessness.

7. Sublime With Rome will be joining forces with the Offspring on the second leg of the pair's 2017 North American tour.

Both groups will head out this September for a dozen shows in the states, kicking off on Sept. 8 in Chicago, IL and concluding on Sept. 30 in Salt Lake City, UT. Tickets are on-sale now!

Third Man Records posted a pair of photos on Twitter, with the caption “Jack White recording songs for his third solo album.” It’s time to get excited.