Due to the ongoing coronavirus pandemic, Record Store Day has had to change a number of details for this year’s event. A few months ago, RSD announced that the original date of April 18 had been moved to later this year. Instead of just a one-day event, RSD 2020 is happening over three days in August, September and October. As well, this year’s event is now called “Record Store Drops.”

Now, the full list of everything being released for Record Store Drops 2020 is here. Included on this year’s list are reissues and releases from Fleetwood Mac, Billie Eilish, Bayside, Ice Nine Kills and many more.

As record stores prepare to open over the next few months, establishments will have to follow strict CDC guidelines to ensure the health and safety of customers. Due to these regulations, Record Store Day decided to split this year’s event into three parts that will happen on August 29, September 26 and October 24. This decision was made to ensure that proper social distancing measures happen at participating locations.

Although Record Store Drops may be different this year, there are still plenty of new items you can get your hands on.

On August 29, archival releases from David Bowie, Gorillaz, The Cure and New Order are being released. Bowie’s ChangeNowBowie features nine unreleased tracks from a 1996 acoustic session during rehearsals for his 50th anniversary Madison Square Garden performance. ChangeNowBowie will be available on vinyl and CD. As well, Eilish’s Live At Third Man Records live album will be released on blue opaque vinyl and Mac DeMarco will release demos from his latest album Here Comes the Cowboy on purple vinyl. New releases and reissues from U2, Tyler, The Creator and The Kinks will also be available.

Read more: Hear another snippet from Bring Me The Horizon’s next album

A month later, releases from Fleetwood Mac, Bayside, Britney Spears and CHON are happening September 26. Fleetwood Mac’s The Alternate Rumors includes alternate recordings of the band’s 1977 historic album. Originally, these recordings were part of a Rumors deluxe reissue, but are now being released as a limited-edition vinyl. On Hopeless Records, Bayside are releasing a 7” Heaven vinyl and CHON are reissuing their 2015 album GROW via Sumerian Records. Spears is releasing a rarities collection featuring remixes and B-sides from her sophomore album Oops!… I Did It Again. As well, Hunny are reissuing their Yes Yes Yes Yes Yes album via Epitaph Records.

On October 24, Beck will release a double A-side 7-inch which features remixes of “Uneventful Days” (remixed by St. Vincent) and “No Distraction” (remixed by Khruangbin). Along with this, Ice Nine Kills are releasing a 10” The Silver Scream: Killer Cuts vinyl via Fearless Records. The vinyl will feature red and silver splatters and a die-cut to resemble a chainsaw.

The full list of what is being released for this year’s Record Store Drops is available to view here.

Which RSD release are you most excited to get your hands on this year? Let us know in the comments below! 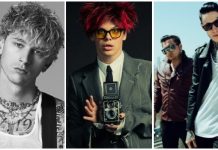