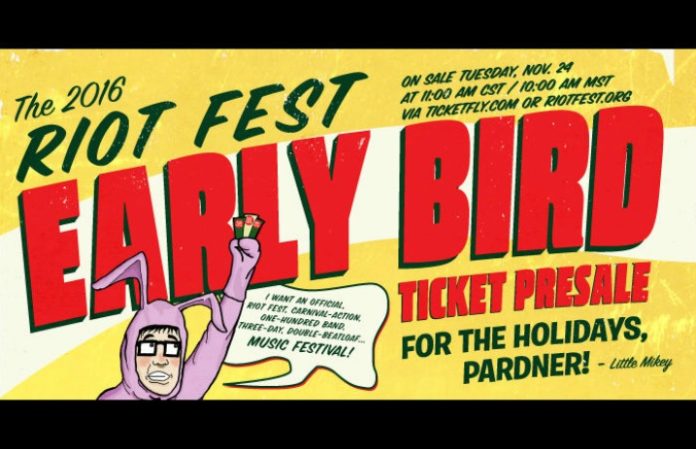 Riot Fest has announced Early-Bird Holiday Presale as well as dates and locations for Chicago’s Riot Fest & Carnival and Denver’s Riot Fest & Rodeo. The Denver date will be held over Labor Day Weekend (September 2-4) and will return to the National Western Complex, with Riot Fest Chicago once again returning to Douglas Park September 16-18.

Riot Fest Early-Bird Passes go on sale Tuesday, November 24 at 12 p.m. EST (10 a.m. MST) with a select amount of three-day passes starting at $99.98 for both Denver and Chicago.

Riot Fest is also excited to announce that The Riot Fest Foundation Karma Cash program is back. The program gives fans the opportunity to earn three-day passes in exchange for public service.  By volunteering a minimum of 25 hours with a registered 501(c)(3) non-profit organization, fans can earn a three-day pass to the Riot Fest of their choosing.