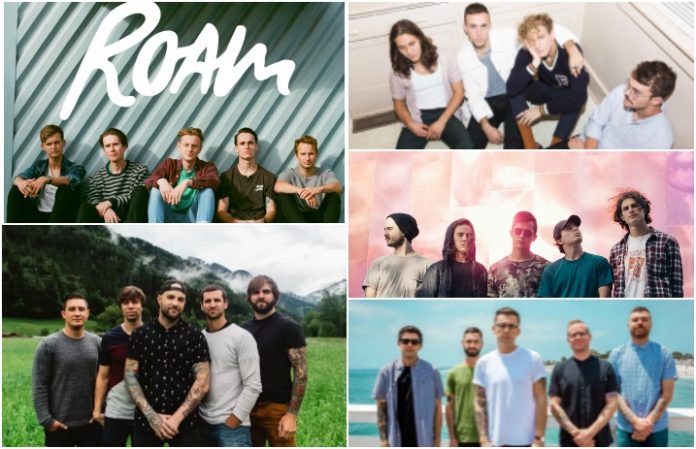 Catch COIN, Chase Atlantic, Seaway and PINE on tour—plus, watch a new music video from August Burns Red, ROAM, Happy and Figure It Out. Check out the news you might have missed today below!

”The Frost” is taken from their new album, Phantom Anthem, out Oct. 6.

In addition, the band will be headed out on a string of headlining tour dates this October, with more to be added soon. Check out the full list of cities and dates below.

3. COIN announced that they’ll be heading out on a North American headlining tour early next year.

The support act has yet to be announced, but they have a solid run of dates running across North America. See the full list of cities and dates below.

The track is taken from their forthcoming album, Great Heights & Nosedives, out Oct. 13.

6. CHVRCHES debuted their cover of Tegan And Sara’s “Call It Off.”

The Tegan And Sara cover is taken from The Con X : Covers, which includes covers of tracks from the duo’s seminal album The Con, including covers from PVRIS, Paramore and more.

7. PINE and I Was Afraid announced a tour.

The tour will be running this November, and you can check out the full list of cities and dates below.

We're hitting the road again in November with our friends in @IWasAfraid �� pic.twitter.com/xTbNQyVPZv

8. Seaway have announced a run of UK/EU tour dates.

The dates are in support of their new album, Vacation, out last Friday!

9. Happy debuted the music video for their new song, “Drowners.”

”Drowners” is taken from their forthcoming album, Sundaze, recorded, mixed and engineered by Will Pugh of Cartel and mastered by Cameron Boucher of Sorority Noise.

10. Lionheart returned with their new single “Trial By Fire.”

The hardcore veterans announced their return with the track, taken from their forthcoming full-length Welcome To The West Coast II, “a sequel of sorts to one of their most acclaimed albums that brought forth a new era in California hardcore.”

11. Pop punk band Figure It Out have released a new music video for their single, “Silence Isn’t Golden.”

The track is produced by Matt Good (From First To Last) and engineered by Ryan Daminson (The Word Alive, Asking Alexandria), and it follows the band’s last EP, Nothing To Lose.