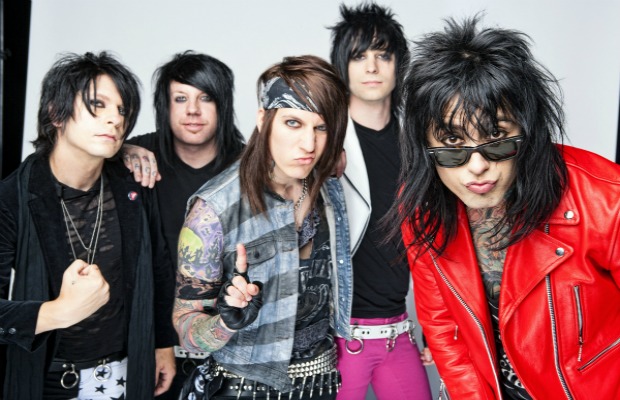 I See Stars have posted a longer statement in conjunction with Sumerian Records.

“‎”All it takes is a spark to ignite my bad intentions.” – Ronnie Radke/Falling In Reverse

Here is the truth:

Months ago before “The Thug In Me Is You” tour started, a cop found marijuana in our van. We were arrested. As a result, Ronnie said we were kicked off the upcoming tour.

All the shows on the tour were already on sale with our name being advertised, so we didn't think it was fair to the fans or to ourselves to not be able to go play where people were expecting us. We offered Ronnie to play the shows for free so he could keep our pay every night of the entire tour as long as we could still keep our commitment to the fans, i.e. the people who are the reason any of this is even possible. Ronnie said OK and allowed us back on the tour but said that we would have to sign paperwork saying we would not tell anyone that we weren't getting paid to be on the tour. The venues and the fans were both not allowed to know the truth, because Ronnie knew it would make him look really bad to the world. The fact that money changed Ronnie's mind about kicking us off the tour just goes to show his lack of integrity. If he was really that concerned or fundamentally against that we got caught with a little weed, then the extra cash in his pocket wouldn't have changed his decision.

Because Sumerian Records was willing to give us a serious amount of financial tour support, we were still able to hit the road without getting paid. However we would quickly find out that us agreeing to Ronnie's ridiculous terms of silence and playing for free were simply not good enough for him. He resulted to threatening violence against Zach in Grand Rapids because “he didn't like his stupid f'n face” and then the next night in our hometown of Detroit kicked us off the tour. His 47-year old tour manager then physically assaulted our tour manager and the FIR camp once again resorted to violent behavior. Ronnie would later that night throw fans out who paid to get in to the show because they are chanting another band's name and make fun of their physical attributes in front of everyone. That is the act of a true coward.

We have been lucky enough to to tour with a lot of great bands like Parkway Drive, Suicide Silence, Asking Alexandria, Trivium, Motionless In White, A Day To Remember, Stick To Your Guns, Memphis May Fire, The Word Alive and others.. and never had a problem. We want to thank Enter Shikari, LetLive, Matt Toka and all the other members of Falling In Reverse besides Ronnie for being great people and a true pleasure to tour with. We are sorry to all the fans out there who were expecting to see us. We'll be back as soon as we can.

There is nothing cool, rock & roll, punk rock, or admirable about treating your peers or fans like they are pieces of garbage. Ronnie Radke is not a good human being. It's one thing to love someone's music, but do not love someone as an individual for who they are not. We do not think it is a coincidence this is the same guy who was arrested for the horrible, violent things you can read about in the links below. He cares about no one but himself and he has reminded us all of this. His latest tweet “people at our shows come to see us everything else is irrelevant. Nuff said.” is his way of telling all the other bands he tours with that they don't matter. Why any artist would throw that type of negativity and disrespect out is something we will never understand. This scene is supposed to be about compassion and understanding. Ronnie is rotten.

Out of respect for the industry professionals involved in this debacle, we will not be publicly disclosing any legal documents on the internet. We can confirm that Ronnie kicked the band off the tour but allowed them back on after they forfeited their pay. We can confirm that they were being forced to sign a non-disclosure agreement regarding this in order to stay on the tour. We can confirm that I See Stars were not kicked off yesterday in Detroit because of anything to do with drugs. It was because a grown man was throwing a temper tantrum who claims to be “rock & roll” but is actually worse than a neurotic pop-star diva with a God complex. Just because you no longer do drugs doesn't mean you are no longer a horrible human being. Ronnie now abuses people instead of substances.”

“Can we start again, go back to what it meant back then, open minds and open hearts, The things that set us apart.” -BANE

THROWING FANS WHO PAID FOR THEIR TICKETS OUT OF THE SHOW
http://www.youtube.com/watch?v=txRqptFM27Y&feature=player_embedded

UPDATE (4:36 p.m. EDT, November 3):
Last night, I See Stars vocalist Devin Oliver asked fans to chant the band's name at the show in their hometown, Detroit, in response to the news below. A fan shot a video of Radke kicking out a group of fans who executed Oliver's request.

After posting the video on their Twitter feed, I See Stars responded, “Respect is something you earn, not demand.”

We are still awaiting an official statement on I See Stars' removal from the tour.

UPDATE (10:18 p.m. EDT):
I See Stars have posted their own statement, claiming that Radke's allegations against them are false. Read below where they warn, “You will find out exactly what happened and you will be disgusted to say the least.”

“We have been kicked off the Falling In Reverse Tour by Ronnie Radke. It has nothing to do with “drugs” or “being late” His statement is entirely false. An official statement from Sumerian Records showing the truth of why we were removed is coming. All emails and contracts have been documented and will be shown publicly in the response to Ronnie's post. You will find out exactly what happened and you will be disgusted to say the least. We promise you us getting ejected today has absolutely nothing to do with his lies about drug use on the tour or being late. It has everything to do with Ronnie's antagonistic violent behavior towards us, his ego, his malicious intent, his financial greed and his demands of no one being allowed to know the truth behind the scenes of this tour.”

ORIGINAL POST (6:26 p.m. EDT):
Falling In Reverse have posted a statement on their Facebook regarding kicking I See Stars off their current The Thug In Me Is You tour.

The post, written by Falling In Reverse frontman Ronnie Radke, explains that I See Stars has been booted due to drug arrests from earlier in the year.

“I wanted to let everyone know I See Stars is no longer on the tour. We had offered them the tour several months back and then not long after we sent the offer, the entire band was arrested for drug possession. If you have been following my story, you know I am very serious about my sobriety and have been sober for 4+ years now. I decided to remove them from the tour at that time as I did not want drug users in my environment. After we informed them they would no longer be on the tour for that reason, their label approached us and asked us to give them a 2nd chance, they assured us the band would not use drugs and they would be professional on my tour. We came to an agreement and I gave them their 2nd chance. Throughout this entire tour, they have been unprofessional. They have rarely showed up on time and have caused undue difficulty on my crew plus employees of the various venues. It's been next to impossible to keep the show running on time. I feel at this point we have no choice but to continue on without them. We're simply trying to deliver the best possible show to all you guys and we don't feel like we can do that with I See Stars. We're stoked to continue on with Enter Shikari, Letlive and Matt Toka (on select dates). I'll see you at the shows. Love and respect, Ronnie.”

The tour will continue without I See Stars into December.