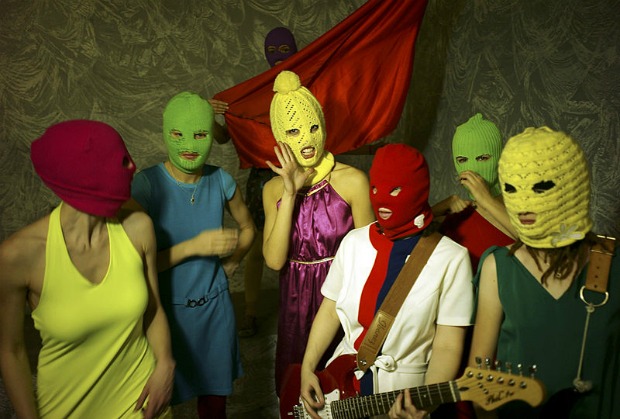 A new article titled “Punk's Cultural Revolution” takes a look at Russian feminist punks Pussy Riot, members of which have been facing criminal charges of hooliganism related to protests against the Russian Orthodox Church and Russian president-elect Vladimir Putin. Via Salon:

“The band has derived their success — and scorn — by turning contemporary punk culture on its head. Where punk was once relegated to musky basements, squats and other shabby makeshift venues, Pussy Riot makes all public spaces — the streets, the metro, the church — their stage. While punk bands play for punks, Pussy Riot plays for commuters, police  and clergy. While punk bands seek fame with glamorous pseudonyms and outlandish rockstar antics, Pussy Riot is masked. While punk bands engage in nihilistic lyricism, Pussy Riot’s songs are direct attacks on the confines of their authoritarian state and patriarchy. Since punk fell from the pop charts in the early 80s, it has been sent on a quest to define and sustain its own identity, creating punk houses, venues, record stores and community centers, resulting in the introverted and self-obsessed situation of the sub-genre today. Pussy Riot does precisely the opposite.

It is fitting, then, that one conservative Russian website translated Pussy Riot to “Uprising of the Uterus.” What was once scandalized, forbidden, subaltern, rises from its rightful caste hidden and below and speaks in the very locations of its oppressing power. Who are these women, these punks, to perform, to pray, to protest in sacred locales? To desecrate is one of punk’s existential tasks. The smashing of sacred relics conjures society’s most archaic reactions: in this case, imprisonment, public shaming, flogging, concerns of Satanism, witchcraft, hysteria.”

What do you think of the article? Let us know in the comments.