Its been two years since Deadpool 2 debuted on big screens worldwide. Despite the years that have passed since its release, Ryan Reynolds is still continuing to spill behind-the-scenes about the Marvel franchise.

The actor took to social media to share the alternative suit design that almost made its way into the 2018 film.

Back in December, we learned that Deadpool 3 is currently in the works. Reynolds shared that Marvel Studios is bringing the legendary comic book character back to life for another film. While fans wait to hear more details and a release date for Deadpool 3, Reynolds is continuing to share some secrets about the franchise.

Reynolds recently took to Instagram to share another unknown fact about Deadpool 2. As it turns out, an alternative design of the character’s classic suit was created for the sequel. The new suit included additional paneling on the arms, back and legs. At the last minute, however, Reynolds decided to keep the original suit for the second film.

“More useless information,” he says in his Instagram story. “This was almost the suit we went with for DP2. It had additional paneling on the arms, back and legs. But I got cold feet and went back to the original.” 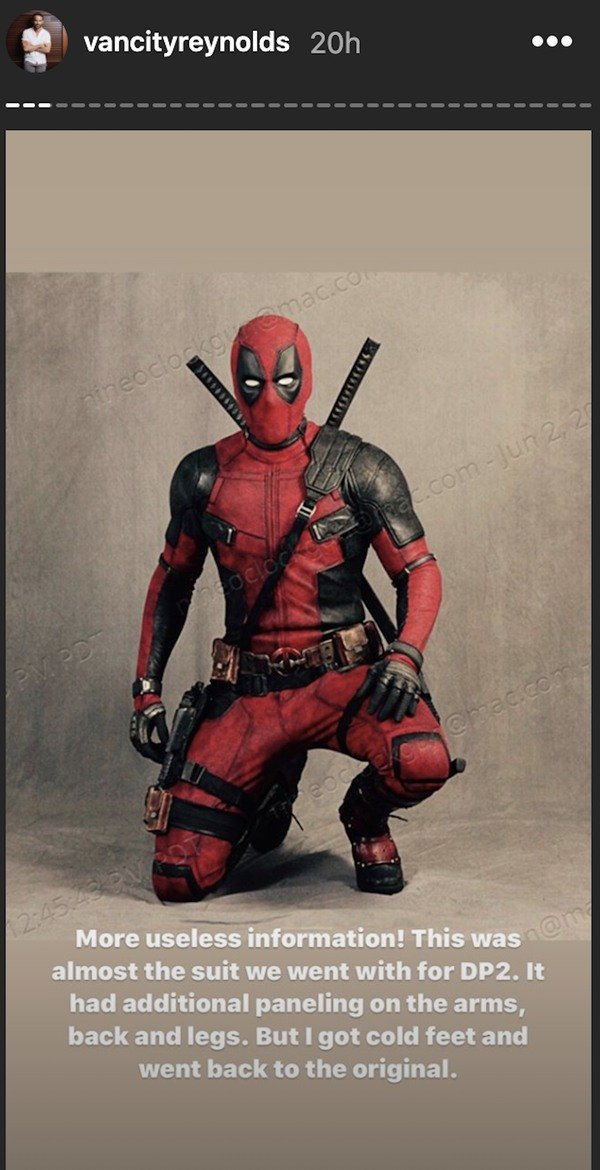 Read more: One of Miss May I’s new songs has the “best riff” they’ve ever written

Although the alternative suit didn’t make the cut for Deadpool 2, maybe it will be brought back for Deadpool 3? Following the merger between 21st Century Fox and Disney back in April 2019, it was confirmed that the franchise isn’t going anywhere anytime soon.

As well, last year, Reynolds hinted that the Deadpool franchise may join the Marvel Cinematic Universe in the future. David Leitch, who directed the second film, opened up about his “crazy ideas” for how the next film could be incorporated into the MCU. If Deadpool were to join the likes of the Avengers, however, the franchise would likely have to tone down its R-rating to be more family-friendly.

At this time, no official release date for Deadpool 3 has been shared.

Do you like the original or alternative Deadpool suit more? Let us know your thoughts in the comments below.