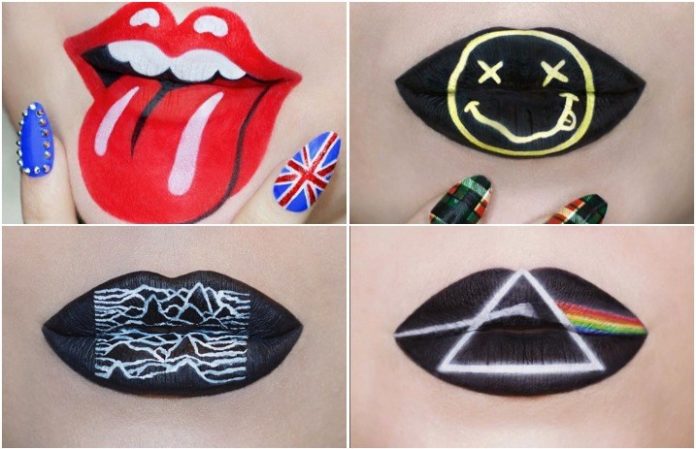 Repping our favorite bands is something we do everyday, and while we usually just rock a band tee, some bump their creativity and rep bands in the most awe-inspiring way.

For beauty guru Ryan Kelly, known on Instagram as ryankellymua and Youtube as ryankelly, she's taken to repping her favorite bands in the most unique way possible: Lip art.

Scrolling through her Instagram feed, Kelly has taken a keen interest in doing all sorts of amazing lip art designs. Her latest is a series of four album artwork-inspired designs that feature some of the greatest rock bands in history: Nirvana, Pink Floyd, Joy Division and the Rolling Stones.

In an interview she did with Bustle, Kelly told the site: “I was actually a musician (singer/songwriter) long before I knew anything about makeup. I had to learn how to do my make-up for the stage and it just sort of went from there!

“So for me, music and this weird little art niche of mine go hand and hand (or lip and lip?). I figured it was high time to integrate the two.”

Combine the two, and the results are seriously amazing. Check out a few of the looks below!

Come as you are. First look in an album cover lip series! Who should be next? Anyone else wanna join me in this series? Tag #ryankellymua and I’ll post some of my favorite looks in my stories! @katvondbeauty liquid lipstick in Witches as the base color @nyxcosmetics Vivid Brights liner in Vivid Halo set with their Vivid Brights shadow in Hot Yellow @shopncla Plaid Nail Wraps #lipart #nirvana #shop #comeasyouare #plaid #nailwraps #90sfashion #lipoftheday #nyx #nyxcosmetics #kvdlook #katvondbeauty

The first band she attempted to create a look from is Nirvana. Instead of actually drawing the album artwork (which would have been quite the challenge), she opted to go with the band’s iconic smiley face logo.

Raise your hand if you knew this one would be next! ����‍♀️ 2 more looks to go in this album cover/band art series. Don’t forget to hashtag #RyanKellyMUA if you’re joining in! I’ll be sharing my favorites on my stories. Who should be next? @katvondbeauty liquid lipstick in Witches as the base @makeupforeverofficial Flash Palette for the white “glow” @wolfefaceartfx palette for the bright whites and the rainbow #pinkfloyd #albumart #darksideofthemoon #lipart #lippies #lipoftheday #katvondbeauty #kvdlook #rainbow #makeupart #makeupforever #wolfefaceartfx

The second album art she recreated is Pink Floyd, where she made the triangular prism from the band’s 1973 album The Dark Side Of The Moon.

The next band up for an album-art recreation was Joy Division. Posting not only a picture, but a mini-tutorial as well, we got to see first hand how to make those mountain shaped designs featured on the band’s 1979 album, Unknown Pleasures.

The last, and certainly not least, is another logo-inspired look. This time, Kelly drew inspiration from the Rolling Stones, perfectly drawing the band’s iconic lip logo on her own lips—it’s a total lipception piece, and we’re loving it.

Of course, these designs aren’t the only ones that Kelly is doing. If you check out her Instagram, you’ll see even more intricate lip art. She even has tutorials on how to achieve some of these looks (and more) on her YouTube channel.

Be sure to check her looks out, and maybe give one of these awesome looks a try.

Which album cover recreation is your favorite? Let us know in the comments below!