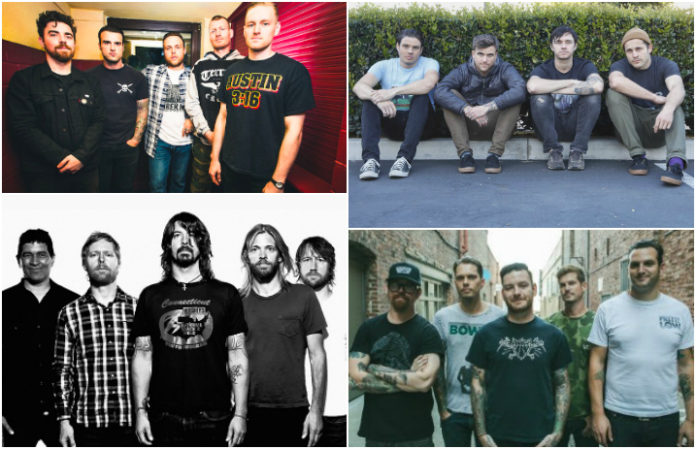 Hear a new song from the Foo Fighters—and catch Stick To Your Guns, the Damned and more on tour!

Read more: Avenged Sevenfold cover Mr. Bungle and other news you might have missed today

1. Foo Fighters played a new song called ‘Dirty Water’ at a gig in Paris on Monday.

The track is taken from their forthcoming album Concrete & Gold, due out this September.

2. It looks like Senses Fail are recording their new album with Saosin’s Beau Burchell.

More of the @sensesfailofficial tower of tone.

And Senses Fail have confirmed that they’ve recorded three songs for their new LP:

Tower of tone. Three songs in our LP “If There Is Light It Will Find You”, best songs we've ever written.

3. Stick To Your Guns, Being As An Ocean and Silent Planet have announced a UK and European fall tour.

The tour will kick off this November in Germany.

Ritter was a member of the California thrash band from 2008 through 2011 and appeared on their 2009 album, Waking Into Nightmares, according to Lambgoat.

A couple days ago we got some tragic news. Our former drummer, Nic Ritter, is dead. He passed either Wednesday or Thursday and I got the word Thursday night. I know few details of how he died. I had not seen Nic in many years, though I had spoken to him a few times fairly recently. I always will to regret that I never saw him again, and we never really caught up on all our old times traveling the world. Nic played approximately 400-450 shows with Warbringer between June 2008 through January 2011, the period where we were never off the road. His drum performance on “Waking into Nightmares” pushed the standard of technicality and musicianship in Warbringer to a new level and helped to shape the identity of the band to what it is today. He was an absolutely stellar player who in my opinion is a true innovator in thrash metal drumming. Sadly, “Waking into Nightmares” is, to the best of my knowledge, his sole recorded musical legacy. Shame that he never played on another record, at least I know he was very proud of our work on that one. Rest easy, old buddy -Kevill

5. British punks the Damned announced a UK tour for 2018.

Tickets for the Evil Spirit tour go on sale at 10 a.m. this Friday.

6. Much of Futurama has been removed from Netflix, and fans are freaking out.

Most of Futurama has left Netflix pic.twitter.com/KHdTCOBgGv

@Netflix I want my #Futurama back pic.twitter.com/I6YQsSXYUP