Arctic Monkeys announce a seven-inch version of “Tranquility Base & Casino”—plus, don’t miss Seaway cover the Cars. Check out the news you might have missed today below!

Saves The Day released their new single “Side By Side” along with its music video. The song comes from their upcoming record 9, available Oct. 26. Preorders are available here. The band will be hitting the road this fall with Kevin Devine and An Horse, followed by a tour in early 2019 with Remo Drive and Mighty. Tickets are available here.

Arctic Monkeys will release a seven-inch of “Tranquility Base Hotel & Casino,” the title track of their most recent album, Nov. 30. The seven-inch will also feature their brand-new B-side, “Anyways.” You can preorder their seven-inch here. The band also shared a mini-documentary highlighting the creation of their album Tranquility Base Hotel & Casino titled Warp Speed Chic. You can check out their upcoming shows below and get tickets here.

Brent Smith and Zach Myers of Shinedown will be joining DC101’s One More Light walk team in the 12th annual Washington, D.C. Out Of The Darkness Community Walk. The walk benefits the American Foundation For Suicide Prevention and will take place Oct. 20 at the Lincoln Memorial. Shinedown have been offering listeners hope and encouragement with their song “Get Up” from their latest album ATTENTION ATTENTION available here. 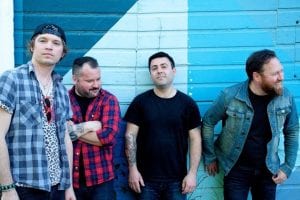 Radar State, consisting of Matt Pryor and Jim Suptic (the Get Up Kids), Josh Berwanger (the Anniversary/Berwanger) and Adam Phillips (the Architects/the Gadjits), just signed to Wiretap Records. They will be releasing their debut album Strays Jan. 11. The band will be playing shows in celebration of their upcoming release, and tickets are available here.

Seaway released a new music video for their cover of the Cars’ major hit, “Just What I Needed.” The group will be heading out on a small tour in support of their latest album Vacation. Tickets are available here.