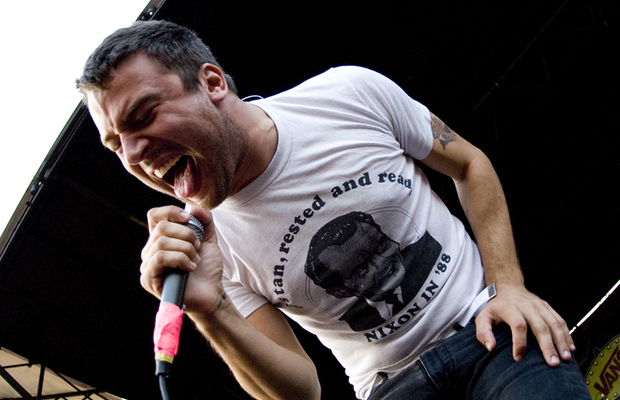 Say Anything have signed with Equal Vision Records. They will enter the studio with producer Tim O'Heir (who also produced …Is A Real Boy) this August and are shooting for an “early-ish 2012” release. The band have issued a statement regarding the pairing, which can be read in full below:

“Hey there everyone. We in the Say Anything camp have been hinting (in an annoyingly vague fashion) towards some big news for the band and our future. As many of you know, Say Anything mutually parted ways with RCA records last year after putting out three records together. Coby and I, having played together in this band for over ten years, made an important decision at this time to turn Say Anything into a permanent, long running and substantial institution not only because we love doing it but because those who love the band, or even just respect us, have helped us grow by leaps and bounds on every single album we've released. Thanks, peeps. You da best.

We decided we want to always be around to support you back. We know this kind of dedicated support for a band isn't common in this day and age of quite a bit of hooey in music. Thus, we felt we owed it back to everyone who believes in us to begin an era of making unchecked “gnar-gnar” Say Anything music; music that springs from what makes the band special without regards for anyone trying to water down or dilute the sprit of our band; purely making the music WE want to make, that we want you guys to love. Towards the end of our days on RCA, as the music industry became more plagued, this wasn't always encouraged by the major label system in regards to bands that sing angular punk songs with yiddish phrases in them.

Once we knew this was our goal, we knew we needed to find a new kind of long term home for Say Anything, as we plan on being in this band for good. We had many discussions with some awesome labels. We're lucky to say this was a painless process, but as talks progressed, it became clear that one label stood out based on their dedication, passion for the band, and fan-ish willingness to love Say Anything for the messy lump of rock we are, as opposed to any particular stereotype of what a band nowadays should sound like (which is pretty much either like Mumford and Sons or Justin Bieber, let's be honest).

Equal Vision Records has put out dozens of our favorite records over the years. As a younger man, I would religiously collect their catalogue and fantasize about being on the label. As I grew older I remained a huge fan of their music and willingness to sign progressive bands that managed to still make you FEEL their music and do cool stuff without being pretentious. EVR embodies many qualities that we hope we possess as a band; integrity, honesty, experimentation, ambition, and a punk sensibility. We've known them personally since before we ever played a single tour and when they heard we were looking at labels, they began flying out to multiple shows, inviting us to their offices, and generally doing everything they could to let us know they wanted us badly on their label including making us an amazing offer that includes LOADS of artistic freedom. There was no B.S “hard to get” dance, or any pretension besides letting us know how much having SA on their label would mean to them. The end of last week, we put pen to paper and are now officially an Equal Vision band as of our upcoming record.

EVR is planning to not only throw themselves with a passion into putting out new Say Anything records, but, additionally, put out all the Say Anything stuff you (quite vocally I may add, you little whippersnappers) wished could be released years ago, from vinyl, to rarities collections, to Baseball, and even forthcoming projects. We want you to think of EVR when you think of Say Anything and the other way around, as they have become not just our partners but our friends and part of our team.

As I said before, we plan on making an undiluted, straight from the slightly-bulging-gut Say Anything record as our EVR debut, and once we found our label, we knew their was only one producer who could bring that kind of ambitious, free-thinking, over the top approach to the recording process. We are proud to announce that for the first time in the better part of a decade, we will be returning to the studio with Tim O' Heir, the super-sick producer who helped us shape Say Anything …Is a Real Boy into what it was. Tim is an exuberant genius and was the first person to instill in me the want to hold myself to the high standards of musicians who I consider way above my talent level. He is also arguably the source of the zany “spark” that made that particular record so special, so look forward to that quality making its return in the context of our next release. We'll be hitting the studio in August in hopes of getting the record out in early-ish 2012.

So, to sum it up; Say Anything is entering a new chapter based on living up to the generous, much-appreciated respect and expectations you guys have for our band, with, for the first time in years, the backing of a label who wants nothing more than to let us be our dubiously-Jewish selves and make sure as many people as possible can hear the music. Priorities are now to be true to the soul of our band, and no more will we be forced into giving any thought to outselling Ke$ha, despite probably still having that g-damn Blo-o-o-o-o-o-o-ow song in our heads two hours out of every week. We know our new record will encapsulate the energy we feel about finally “owning” what we do, and we couldn't be happier to join the roster of Equal Vision Records, and be reunited with Tim O'Heir. Look forward to more updates as we begin this process!”