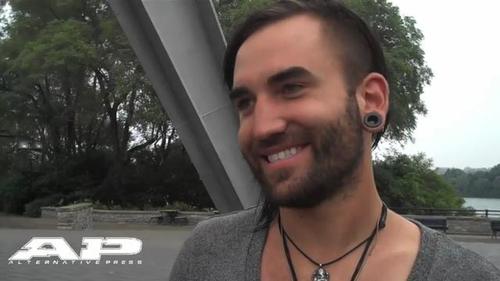 We’re receiving reports from people in the music industry that Tyson Stevens, 29, former vocalist of defunct band Scary Kids Scaring Kids has died. He had recently celebrated his 29th birthday in September.

We've reached out to former representatives for Scary Kids as well as for Stevens' new band Coma Prevail for more information. A source who wishes to remain anonymous has told us that Stevens was found dead this morning by his girlfriend in Tucson, Arizona. Again, we are still seeking further confirmation.

Stevens formed the synth-driven post-hardcore outfit Scary Kids Scaring Kids in Arizona in 2002. After releasing their debut EP, After Dark, the band would go on to release two full-length albums—The City Sleeps in Flames (2005) and Scary Kids Scaring Kids (2007). The group signed a major label deal with RCA Records, before announcing their breakup in 2009.

Read what people have been saying on social media beow:

I just found out some very sad news that an old tour friend Tyson Stevens passed away lastnight in his sleep. I meet Tyson when The Sleeping did the last Scary Kids Scaring Kids tour and everyday on that tour was an awesome time. It ended up being one of those tours that I'll never forget. Everyday we all hung out and partied like one big traveling family. It's sad that the world lost a talented and great man like him. He will be missed. RIP Tyson

Andrew Cook, manager for the Dear Hunter, tweeted the following:

Never easy to hear an old friend has passed, no matter how long it's been. Rest easy, Tyson Stevens. You were a sweetheart. #RIPTysonStevens

… Im sorry you couldn't make it out brother.. Really tears at me. RIP brother. Keep those stars warm for the rest of us.

More members of the music community remember Stevens on Twitter:

So sad to hear we lost another great soul…RIP #TysonStevens you were always so kind to me, I'll never forget the times we shared

RIP Tyson Stevens. Scary Kids Scaring Kids was the first big band to take us out on tour. So sad to see you go man. pic.twitter.com/vsIZmawloW

RIP Tyson Stevens. Scary Kids was the first "big band" to take a chance and bring out my old band and I'm forever grateful. Sad to see ya go

Rest Well Tyson. SKSK will always be a big part of my high school years and helped pave the way for a lot of bands in this scene.

Got off stage tonight to find out my friend Tyson Stevens died today. RIP man, you left us too soon.

RIP Tyson Stevens. We had a blast on tour with our friends in Scary Kids back in the day. Such a loss…

RIP TYSON STEVENS! You will be missed! http://t.co/ktL40eJBHV

One of my fav videos by @scarykidsscaringkids http://t.co/ODFLAUXZC1 you live on through the art you created while here my friend.

RIP Tyson Stevens. We struggle sometimes not as artists but as people, and as souls we lose our vision of (cont) http://t.co/BnJjqTjTt4