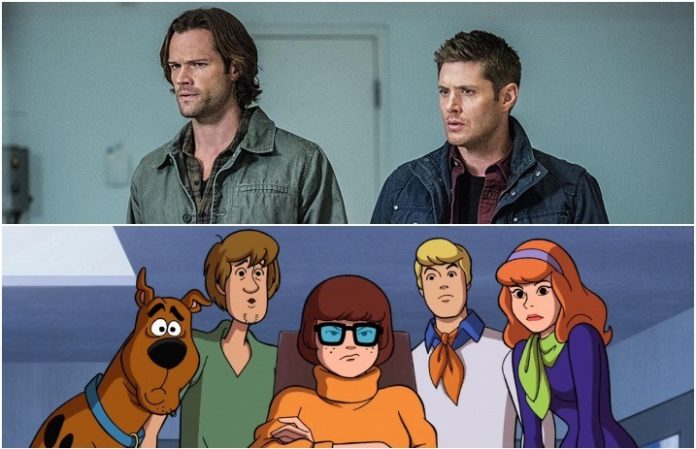 Scooby-Doo and Supernatural are a pairing we never thought we'd see, nor is it something we thought we needed in our lives—until just now. Luckily for us, it looks like a real-life crossover is going to happen, as Entertainment Weekly reports.

The unlikely pairing, coined “Scoobynatural,” is slated to be a part of the CW as one of the episodes in this current season of Supernatural. The episode appears to be a mix of both live-action and animation, where fans will get the best of both worlds. The reasoning behind Sam and Dean's crossover into the world of Scooby-Doo? Dean wrestling with a plushy.

Per the EW exclusive, the episode will begin showing Dean in a wrestling match with a live plushy. For his efforts, a pawnshop owner offers the brothers a free TV in order to show his thanks. Sam, being Sam, is of course a bit weary of the free gift, but Dean is thrilled about it. Taking the TV back to their bunker, Dean creates his own version of a man cave: the “Dean Cave.”

“Once they get over their amazement at being in the cartoon, two things happen,” co-showrunner Robert Singer told EW. “They say, 'We’ve been in a situation like this before with the Trickster and I think we’re supposed to play this out.’ And then they realize they’re in a Scooby-Doo cartoon, which makes Dean incredibly excited because Scooby-Doo was his favorite cartoon growing up.”

Yeah, we're pretty excited to see just how well the Mystery Gang and the boys in Supernatural team up together with this new monster.  Check out some of the EW exclusive shots below!

We're pretty stoked about this upcoming episode. Be sure to catch “Scoobynatural” when it airs Thursday, March 29 at 8 p.m. ET on the CW.