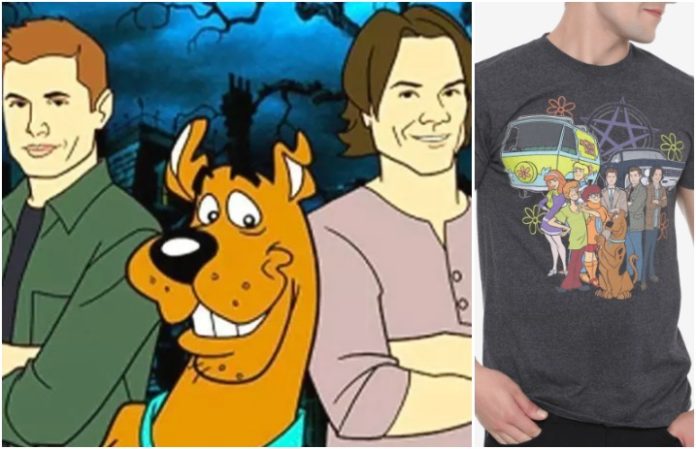 Earlier this month, we heard the news of the crossover we probably don't deserve but are so glad we're getting: The highly anticipated Scooby-Doo and Supernatural crossover.

The crossover isn't the only exciting thing that's happening, though. If you hurry, you can get some merch to wear while watching the episode!

Read more: Watch the first teaser for the ‘Scooby-Doo’ and ‘Supernatural’ crossover

The ScoobyNatural merchandise has officially made its way onto the Hot Topic website, and we need at least 20 of each shirt. On sale now, you can get your hands on merch that features the Winchester brothers and the Mystery Gang. The best part? Everything is 25 percent off at Hot Topic's website, so you're new merch will be at a bargain price.

Check out some of our favorites below!

This design features the whole team and it's only $15.67 (at the time this article was posted).

If you want the main people from each show, this is your shirt! The design features the Winchester brothers with Scooby Doo, and we're obsessed.

Featuring Supernatural's popular “join the hunt” tagline, the shirt features everyone in the crossover and it's priced anywhere between $15.67 – $17.17 (at the time this article was posted).

Featuring Scooby-Doo with the crossover's title above him, the last shirt is priced at $22.90 (at the time this article was posted).

Yeah, we're pretty thrilled about all of these crossover shirts.

As previously reported, the reasoning behind Sam and Dean's crossover into the world of Scooby-Doo? Dean wrestling with a plushy. The episode will begin showing Dean in a wrestling match with a live plushy. For his efforts, a pawnshop owner offers the brothers a free TV in order to show his thanks. Sam, being Sam, is of course a bit weary of the free gift, but Dean is thrilled about it.

Taking the TV back to their bunker, Dean creates his own version of a man cave: the “Dean Cave.”

“Once they get over their amazement at being in the cartoon, two things happen,” co-showrunner Robert Singer told Entertainment Weekly. “They say, 'We’ve been in a situation like this before with the Trickster and I think we’re supposed to play this out.’ And then they realize they’re in a Scooby-Doo cartoon, which makes Dean incredibly excited because Scooby-Doo was his favorite cartoon growing up.”

Yeah, we're pretty excited to see just how well the Mystery Gang and the boys in Supernatural team up together with this new monster.

Be sure to catch “Scoobynatural” when it airs Thursday, March 29 at 8 p.m. ET on the CW. Watch a teaser for the episode below!