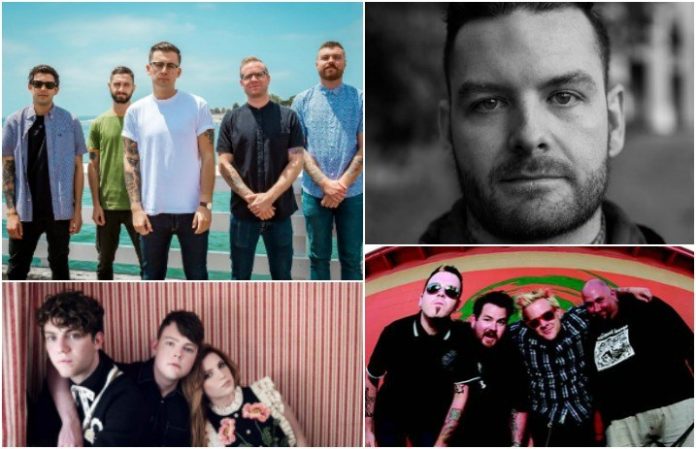 Watch new videos from Seaway and LANY, plus news from Echosmith, Buddy Nielsen, Hippo Campus and more! Check out the news you might have missed today below!

Read more: Motionless In White to release ‘Graveyard Shift’ on vinyl and other news you might have missed today

Seaway just released a video for their song “Lula On The Beach” off their upcoming album Vacation. Check out the video below!

Seaway’s Vacation is out Sept. 15. You can pre-order here, and catch them on tour:

Echosmith have postponed the release of their sophmore full length that was supposed to be released on September 29 to Spring of 2018. They've also pushed back all the tour dates they had planned for fall to coincide with the new release date. They say that all tickets and VIP packages will still be honored on the new dates. Instead of the album, they'll be releasing Inside A Dream (the name previously planned for the full length) as a 7 song EP on September 29. Their statement says that “We've been overrun with inspiration lately and have more we would like to add to the album.” Read the full statement and check out the new tour dates below!

Skate Or Die Fest in Dallas, Texas has announced the lineup for 2017 and there are some big names, including headliner Bowling For Soup, Frankie Cosmos, and Surf Curse. The fest is on October 22 and will have awesome musical performances as well as a huge skate competition with a $3,000 prize. Check the full lineup below and grab your tickets!

LANY just released a new video for “Super Far,” off their self-titled debut album, LANY. Check the video out below and be sure to catch LANY on tour! The band will head out on a headlining 32-date North American tour this fall. Tickets are on sale here.

Hippo Campus just suprise released an EP called warm glow. The EP follows the release of their full length landmark. While physical copies of warm glow won't be available until November 10 via Grand Jury Music, you can stream or download the new EP right now! Hear fan favorite “baseball” off warm glow below, and make sure to check out Hippo Campus' tour dates!

6. Buddy Nielsen of Senses Fail is hosting an EMO Night

Probably the best news all day, especially if you live near Pheonix, Arizona, is that Buddy from Senses Fail is hosting an EMO Night! The festivities will take place at the Rebel Lounge in Pheonix on September 27, and will include a DJ set by the man himself, Buddy Nielsen, plus a live tribute to Taking Back Sunday by Sundressed, and resident DJs Daylight Heist. Get your eyeliner ready, Pheonix! And don't forget to check out Buddy's new ultimate emo supergroup with members of Finch, Speak The Truth's album pre-order for their debut, Everyone You Love Will Slip Away From You, which just went live today!

The split will be released on November 3 on Fat Wreck Chords. You can pre-order the split on iTunes or Bandcamp right now! And check out one of each of their songs below!

Direct Hit—Blood On Your Tongue