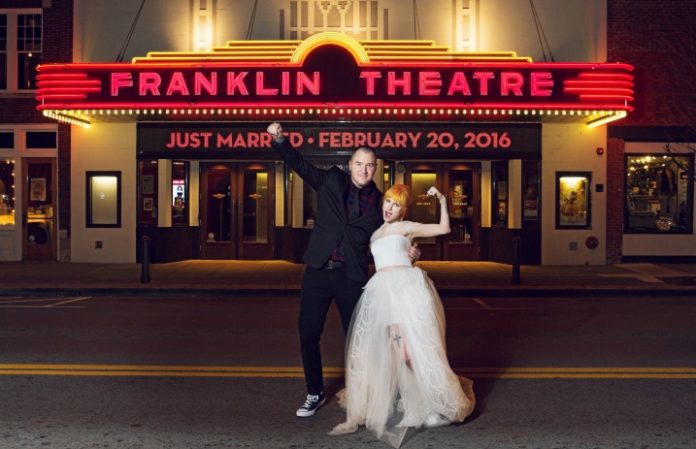 One of the scene's favorite duos, Hayley Williams and Chad Gilbert, were married in a private ceremony in Tennessee over the weekend. The happy couple celebrated with friends and family—including their Paramore and New Found Glory bandmates—at The Franklin Theatre in the heart of historic downtown Franklin. The couple used their special day to highlight their favorite things about living in Nashville: The entire evening focused around their local community.

See the official photos of their happy day, captured by photographer David Bean, below:

The Franklin Theatre holds a special place in Williams’ heart.  She and her bandmates helped contribute—along with others in the community—to the restoration and re-opening of the theater after it shut down.

Five Daughters Bakery made a 100 layer donut cake, which was three tiers, each a different flavor. The bakery made 100 donuts, including vegan and paleo options, with quotes on them such as “I like your butt” and “You’re so punk rock.”

The couple's celebration of love wouldn't be complete without their beloved Alf Williams Gilbert.