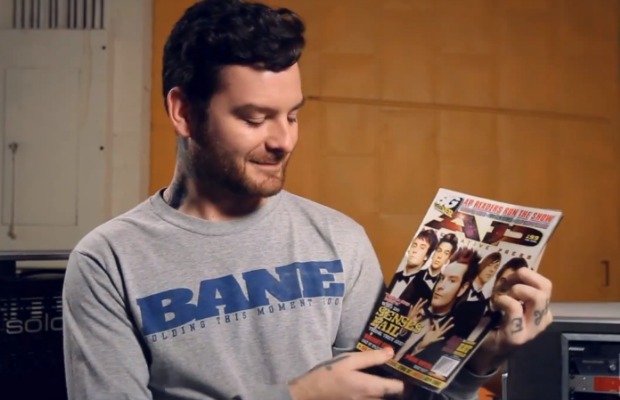 On a recent episode of the 100 Words Or Less Podcast, Senses Fail vocalist/brainchild Buddy Nielsen gave the most tell-all interview of his career. In the interview, Nielsen opens up about his sexuality, which isn’t exactly easy to define.

The singer describes a time in his life when he struggled with sexual addiction and frequently paid for prostitutes—both male and transsexual. Nielsen admits he did it at home, on tour and spent thousands of dollars.

He doesn’t identify as gay, though, as he has only had long-term relationships with women, like his current girlfriend, who he plans on spending his life with. (It’s honestly better to listen to him explain it on the podcast.)

Nielsen also dives into his past dependence on alcohol, saying he essentially drank everyday for nine years. All of this seems to stem from his problems with anxiety and panic attacks, which appear to have been triggered by a traumatic childhood event that Nielsen has mentally blocked out.

It’s an extremely brave and honest interview that Nielsen gives—and it’s definitely worth a listen. Check it out here, and let us know your thoughts.

Nielsen wrote about the episode:

“For those that have followed Senses Fail you have come to know some of my struggles with anxiety, depression and substances abuse. In this podcast I wanted to dive deeper into the origin of these issues, as well as share some deeper, more personal topics that I have never spoken about publicly or in our music.”

“For over 9 years I suffered in a cycle of shame over my sexuality, substance abuse, sexual addiction, anxiety, depression, grief and self loathing. I fell into a pit of despair and did a lot of damage to myself and to people around me. Through most of it I kept a pretty clean and convincing sheet over the messiness of my life, which in turn caused even more pain. I did a lot of things that were very dangerous and put myself into situations where I was putting myself and others at risk  Over the coarse of the last year I have been able to find a level of peace that I did not know existed. In turning towards the very things I feared, I was able to learn to be with them and ultimately have compassion for them.”

“While the above paints the overall tone and picture of what I am discussing, there are a couple of pieces I want to make sure come across. I am coming out and saying that I have struggled with alcohol dependance and abuse, that I have also battled with sexual addiction and that I do not identify as straight but I fall somewhere on the spectrum of sexuality closer to the middle, yet do not feel I identify with a specific label.”

“I believe that a lot of what drove me to some of these addictions and behaviors was a mistrust and fear of my sexual orientation. I do not identity as straight or gay or bi and that left me feeling very isolated and shameful. In many ways I felt that my sexuality was wrong, disruptive and needed to be secluded. I feel that if I had been more comfortable with who I was inside and more accepting of my sexuality I could have avoided a lot of suffering. A lot of my sexual addiction was fueled by want and need to experiment sexually but doing so in a container of shame and guilt left me stuck in dangerous self destructive behavior. Acting out sexually and then shaming myself for it, led to deeper stronger levels of self hatred.”

“I want to come out so that other people know, there are people like them. I know there are people out there right now struggling with their sexual orientation, sexual identity or gender, wether they know in their heart of hearts they fall into a label or not, it doesn’t matter, what matters is that we cultivate a world where people can feel safe to be themselves. Our human sexuality is not limited to the extremes of two poles, two genders or a even a middle ground, the range of our emotions and need to connect are much larger than that and the box we are trying to create for people is much to small and limiting. There are so many of us that do not fall into the box and trying to fit into it, creates an unbearable amount of pain and many times suicide.”

“We have made a lot of amazing strides towards LGBTQ rights in this country over the last few years but I feel there is so much more that needs to be done. The safety net for people that fall into the LGBTQ world needs to grow, one way it can do that is for people like myself to have the courage to come out and truly be authentic with who they are and to demand that the conversation grow and continue to move forward. I want to encourage radical acceptance and radical inclusion on a level that far exceeds where we are at right now.”

Please excuse me if I offend anyone in this letter or in the podcast. I am just learning to discuss these topics openly and am just becoming comfortable with the proper words and politically correct ways to explain things. I do not wish to cause anyone any harm, or marginalize anyone. I wish for this to be inclusive and inviting to anyone that has ever suffered any level of addiction, pain, anxiety, depression or any amount of unwanted stress that was caused by feeling isolated for any reason.