Former Set It Off guitarist Dan Clermont revealed he would no longer be using his Instagram account to promote as much music as he is now.

Last May, the band released a statement following allegations against an unnamed member of the band.

Two days later, the band announced guitarist Dan Clermont would be “taking a hiatus” to spend time with family. It was also stated he would “pursue this privately [and] legally.”

“In light of the recent allegations regarding Dan Clermont, we have taken the necessary time to investigate this matter on both professional and personal levels before making a statement. We have jointly decided that he will be taking a hiatus and stepping away from Set It off to spend time at home with his family and pursue this privately [and] legally. Thank you to all of our amazing fans for standing by us during this time.”

Set It Off have revealed that Clermont has decided to turn his hiatus into a departure from the band.

Clermont was a founding member of the band when they formed in 2008. He’s appeared on every album with the most recent being this year’s Fearless Records debut, Midnight.

You can read the full statement here.

“Love y’all dearly hope you understand” he posted. “Over time I just grew to realize my heart truly was being at home with my family. I am the happiest and healthiest I’ve been in years.”

Now, Clermont announced in his Instagram story that he won’t be posting much about music anymore and that he’ll be changing his username for a fresh start.

As I’m preparing for my next writing trip to LA, I felt this would be a good way to kick off the year by letting you all know I will no longer really be posting anything music related on this account as I’m still trying to work out with instagram getting my username changed and honestly just starting fresh.

I’ve been fortunate enough to have some great opportunities working with some really amazing people over the course of the past few months which truly helped me hone in on my focus of Song Writing and Producing.

So if you want to keep up with what I’m up to starting this weekend I’ll be posting from my new account @SoundByScars. 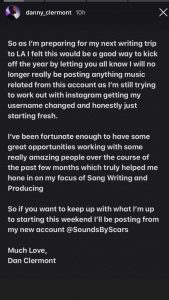 What are your thought on Dan Clermont’s statement? Sound off in the comments below!