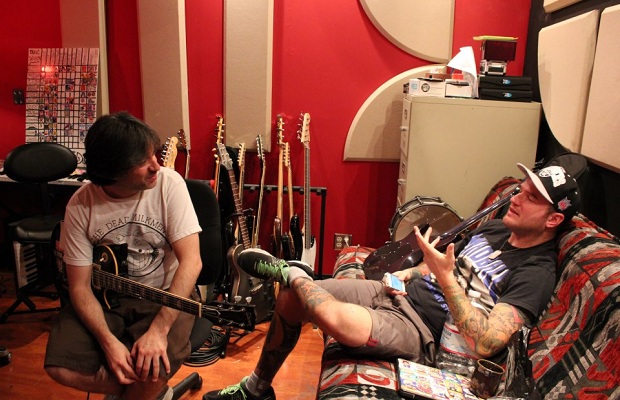 Shai Hulud have finished their fourth album (to be released on Metal Blade Records), which will feature both production and vocals from Hulud alum/New Found Glory guitarist Chad Gilbert. Once out, it'll follow 2008's Misanthropy Pure.

Gilbert won't be a permanent member, but is confirmed to perform with the band on September 16 in Miami, FL and at the Revelation Records 25th Anniversary show in New York City on October 13.

“It's been a strange and unpredictable journey, friends…

And the journey continues. Spare us a few moments, and we'll fill you in on the recent goings-on.

Your friendly neighborhood Shai Hulud has indeed finished recording a new album which will be released on Metal Blade Records in 2013, keeping with the it-takes-these-guys-forever-to-release-an-album motif we've honed and perfected. Regarding the record, it's never easy to sing praises of your own work. That said, allow us to humbly suggest we're fairly confident you won't be disappointed – taking a break from listening to, scrutinizing and nitpicking something you've immersed yourself in does wonders for your perception of it. Having done just that, we can conclusively state we are very proud of the album – though not to satisfaction, of course, because as we all know, that is the death of desire.

See what we did there?

Our friend and former singer, Chad Gilbert, who produced the album also returned to sing. This is the first time in over a decade he provided recorded vocals to a Shai Hulud song, much less an entire album – his first since “Hearts Once Nourished With Hope And Compassion” in 1997, and distinctively the first time Shai Hulud features the same vocalist on two full lengths, mimicking our friends in Further Seems Forever who see their original singer, Chris Carrabba, return to sing on their forthcoming album “Penny Black” due out this year.

Surely, a majority of you saw this coming. We knew our elusive responses of “Clark Griswold” when asked 'who sang on the album?' would foster this very speculation. Tacitly obvious, really. Hidden in plain sight even. If this is a total shocker to you, don't worry too much; while banking, and parking in metropolitan areas is sometimes difficult, with moderate help you should manage well enough. In theory.

Just to be clear, Chad has not rejoined Shai Hulud, and it's highly unlikely there will ever be a full tour with with him fronting the band. You can, however, catch us play together on September 16th at Reel & Restless Fest in Miami, October 13th with Chain Of Strength (!), Bold, Battery, and Shook Ones at one of the Revelation Records 25th Anniversary shows in NYC, and another show the following day, October 14th, in a city yet to be determined. These shows will be a blast. We hope to see as many of you as possible so we can celebrate together music, creative unions, and enduring friendships.

You guessed it, the fact that Chad sang on the new album does in fact reveal we do not currently have a fixed, permanent singer. Another shocker. Over the past few years we've been fortunate enough to have friends who have loaned us their voices for tours and recordings. We're grateful to everyone who dedicated any amount of their time and effort to help keep Shai Hulud moving forward. Without them, their friendship, their passion for the music, we would have remained stagnant. Because of them we progressed. For that we owe all of them a serious debt of gratitude words cannot express.

See what we did there?

And the journey continues, moving forward as we always have with the help and support of our friends, and those we have connected with musically. Within a day or so we will posting details on what we always look for in the singer of a Hardcore band. We hope to be hearing you.

Please check in with us online within the next couple of days for details: