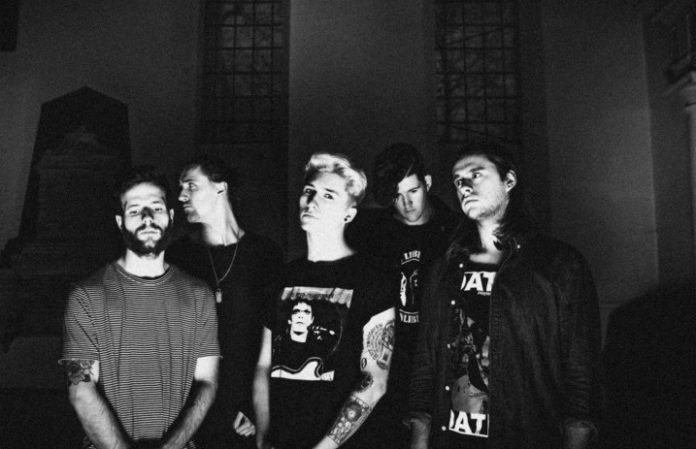 Sharptone Records has hit the ground running. The label, which opened its doors last June, is welcoming another band to its roster: Holding Absence.

Cardiff, Wales' Holding Absence joins the likes of Attila, We Came As Romans and Miss May I on Sharptone. Watch their new video for “Permanent” below.

“'Permanent', as a song, is quite simply a plea to a suicidal friend. I wanted to convey the concept that sadness is temporary and death is infinite,” singer Lucas Woodland says on the track. “The split-second decision to take your life will result in unending oblivion. My lyrics span across many different topics, and I think that 'hope' is a huge thing for me to sing about. 'Entertaining death is such a fruitless endeavor. You want to die today, you don't want to die forever.'”

The video was filmed by photographer Ashlea Bea. It was directed and edited by drummer Ashley Green.

“The idea behind the video was a very easy one—We wanted to introduce both our black & white aesthetic, coupled with our intense live show,” Woodland says. “We believe sometimes that less is more, so the video did the job perfectly and it was all DIY too!”

Holding Absence began as a melodic death metal band, but they morphed into a new direction.

“I don't know if 'Death metal' was ever on the agenda, but we've definitely honed our sound over the last six months. As a band we have an eclectic music taste,” Woodland explains. “Everything from The 1975 and Radiohead to bands like Stick To Your Guns and even My Bloody Valentine.

“It would be a shame to waste all that inspiration by getting tunnel-vision, and as musicians we can definitely cover a lot of different sounds, why settle for one?”

Woodland called their signing to Sharptone “a dream come true.”

“You're led to believe that signing a record deal is the biggest thing your band can do growing up as a musician, and though that isn't always true—Sharptone really are a Godsend,” he says. “It was a mere 10 days after we put our first track out that we received a mail from them, and were on Skype talking about ourselves, our music and our future goals.

“We're blessed to have them, and now it's all about doing them and ourselves proud and creating something beautiful together.”

Woodland adds that writing and playing music is what they love to do the most.

“I write lyrics about things because they're what I've overcome and experienced in life,” he elaborates. “There's nothing but sincerity in this band, and if there's one thing we want to show people with our music, it's that we truly live for it.

“Everything that comes out of our band has come from the heart, and if it can find its way into the hearts of others, nothing more we can ask.”