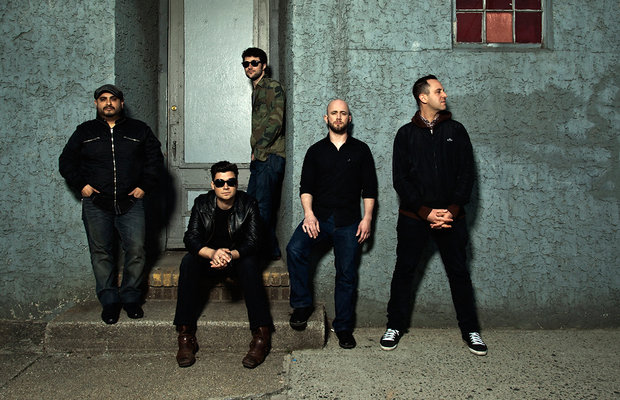 Taking Back Sunday bassist Shaun Cooper (second from right) took to his blog to offer some perspective on the recently unveiled video of TBS frontman Adam Lazzara and a fan getting into an “altercation” at a recent show in Glasgow, Scotland. The video’s below, and at the risk of being presumptuous, doesn’t appear to be much of an altercation at all. Cooper agrees:

“Today a video from our recent show in Glasgow surfaced where Adam had what could loosely be called an “altercation” while out in the crowd.   Usually we refrain from discussing stupid things and taking the higher road, well to hell with that.  The incident was brief, all parties unharmed, though I don’t condone any of the weirdness seen in the clip.  What I also can’t condone is the rampant shit talking and wild speculation going on over at absolutepunk.net.

Know I am not complaining about any of this.  I absolutely love my job, and I love my bandmates. I am so lucky to get to have such a crazy schedule and see so many amazing places while playing music with my friends.   Adam has had a rough go of it the last couple months and I felt it needed to be addressed.    He is a proud man, and doesn’t want pity.  This is why he doesn’t talk about it in detail.  He went through all this because he didn’t want to let people down.  We (the band) have to pay the bills.  You (the fans) paid your hard earned money for that ticket.  I am well aware we have some less than stellar shows, but we also have some pretty great ones too.  We’re only human, and sometimes extenuating circumstances prevent us from performing at our very best.  I promise you that over the last 2 years, none of us have ever once phoned it in.

We’re coming out swinging on the Warped Tour.  Can’t wait to see everyone this summer.”

What do you think of the video and Cooper’s response? Let us know in the comments.