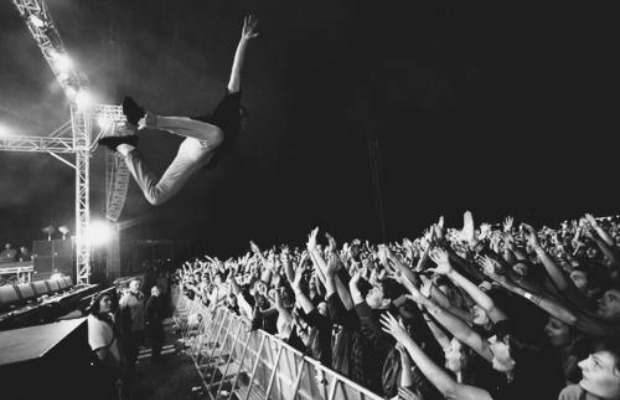 The endless debate over stage diving has been reignited again. At a recent Joyce Manor show, the band’s frontman pulled a stage-diver back onstage and shamed him in front of the crowd. This isn’t the first stage diving controversy: Skrillex was sued by fan over a stage diving incident, and a Miss May I fan died after reportedly taking the dive at a New York show.

In our recent issue, AP 315, we asked members of Stray From The Path, the Hotelier and Andrew Jackson Jihad to weigh in on whether stage diving should be banned or not. Here’s what they said:

Tom Williams of Stray From The Path:

“If you want shows to stop being fun, sure. It’s exactly like the NHL talking about taking fighting out of the game. It’s part of the culture and the experience, and you can’t get it at any other show. It’s what makes hardcore special. The first time I saw someone stage dive, I was hooked instantly and had to go to every single show. There are always going to be injuries, and that is unfortunate. But there are more injuries sustained in car accidents. Are cars going to be banned?”

“While we ask our audiences not to stage dive, I don't think it should be flat-out banned. In the right environment, stage diving can be awesome (e.g., Pantera). I do, however, feel that if a band asks the audience to not stage dive, that request should be honored. My general opinion is that it’s barbaric, dangerous and selfish, but that's not necessarily a bad thing when dealing with rock ’n’ roll (e.g., Pantera).”

Christian Holden of the Hotelier:

“I hate stage diving both as a listener and performer. When I'm playing, I don't care about the spectacle of the “wild crowd” and more so just find myself worrying if the people up front are getting kicked in the face, if the smaller folks are getting crushed and if someone is going to trip on my cable and rip the head off my bass cab or step on our pedal boards. My energy onstage correlates to the energy in the crowd, and when I see that someone is annoyed because he or she is getting crushed, it bums me out. I'd rather see peeps in the crowd yell at a stage diver or let the person fall on his or her face. There is more power in small or shy people speaking for themselves and affirming themselves in the spaces they occupy.”

In relation to the Joyce Manor incident, other musicians have taken to Twitter and voiced their opinions. Check out what they had to say below, and let us know your thoughts.

The Internet drama circus of entitlement is impressive in the last couple weeks. Love to @JoyceManor for considering their audience.

Thank you @JoyceManor for getting it right! I almost died in a pit I didnt wanna b in as a teen at Warped & got made fun of for being a girl

@JoyceManor has this one right folks. Going to shows should be a way to connect with others and have fun. Not to make people feel unsafe….

we are 100% ok with people diving at our shows, as long as you are using your brain while doing so