This new record—which the band are self-releasing away from Rise Records—compiles the best versions of the original album’s 10 songs from shows in nine different cities. All of the audio was mixed by producer/engineer Sam Guaiana.

LIVE: When Broken is Easily Fixed

Recorded LIVE across North America on our 2018-2019 tour celebrating 15 years of our debut album.

The project began when Silverstein guitarist Paul Marc Rousseau went back and listened to all of the live recordings made during the tour, opting to compile the live album from different performances across various cities as opposed to one entire show.

The cover art also creates the vibe of a vintage vinyl rarity of the ’70s that you might discover at a used record store. “We wanted to capture the audio as something to reflect back on,” drummer Paul Koehler says. “A project like this gives us the ability to have a little fun, so we decided to hire a local designer who really specializes in vintage design. The result is a nice interpretation of a throwback live record that still remains bold and different from the rest of our catalog.”

The album art and tracklist for LIVE: When Broken Is Easily Fixed is below: 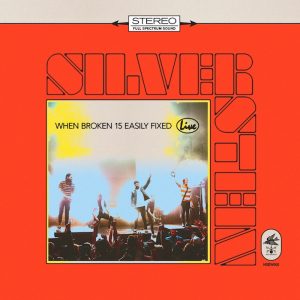 Like every great rock band before us, we made a live record,” Rousseau says. “Don’t for a second think this means you don’t have to come to the shows anymore, though: We made it sound slightly worse than our actual live show for that purpose.”

This is the second self-released project from Silverstein. The first, REDUX: The First 10 Years, came out earlier this year. Fans may preorder the release here.