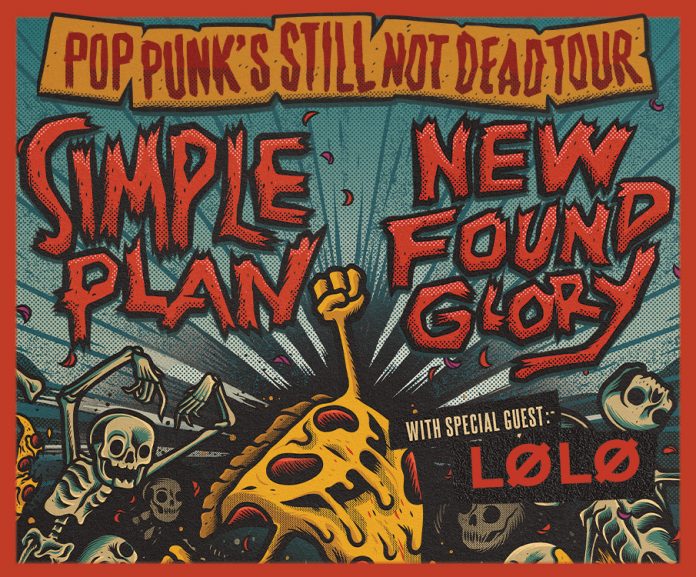 Pop-punk legends Simple Plan and New Found Glory have rescheduled their Pop Punk’s Still Not Dead tour. Hitting the road in September 2021, the groups will be joined along the way by rising alt-pop act LØLØ.

Alternative Press and Live Nation have partnered to offer a special presale for the tour. Launching Wednesday, May 26 at 10 a.m. local time, the sale will run until Thursday, May 27 at 10 p.m. local time. To participate, visit here and use the password ALTPRESS.

The Pop Punk’s Still Not Dead tour was originally announced in February 2020, just after the release of New Found Glory’s latest album, Forever And Ever x Infinity. Slated to begin in May, the tour would have featured support from Knuckle Puck.

Many fans were excited to see Simple Plan and New Found Glory tour together for the first time. In a Facebook post accompanied by the announcement video, Simple Plan made it clear the sentiment was shared by the artists as well.

“It’s finally happening,” the post reads. “It took almost 20 years, but we are really stoked to announce that we are heading out on tour this summer with our friends New Found Glory on the Pop Punk’s Still Not Dead tour! This is the first time we’ve ever toured together, and we can’t wait! We’ll be playing all over the U.S. and bringing Knuckle Puck as our special guests, so you know it’s gonna be RAD!”

Read more: 15 albums from 1995 that are a perfect gateway into the world of punk

As with public life in general, the COVID-19 pandemic brought about significant disruptions. The Pop Punk’s Still Not Dead tour was no different, and the artists were forced to delay the run.

In a heartfelt February 2021 Facebook post, Simple Plan acknowledged the challenges that accompanied the pause to live music.

“It’s been heartbreaking and very difficult to be away from you for so long, and we can’t wait until we can all be together again to experience the magical experience that is live music,” the statement reads. “We know a lot of you are going through a tough time not being able to go to shows and missing the connection and sense of community and belonging that comes from standing in the middle of a crowd listening to your favorite band or song. We miss it too, so much. Let’s all remember that we’re finally starting to see the light at the end of the tunnel and that we will be reunited very soon.”

Even so, plans to resume the event were never wholly abandoned. In a January 2021 statement on their website, New Found Glory insisted that they would eventually carry on.

“We hear there may be some confusion if the Pop Punk’s Still Not Dead tour with Simple Plan is still happening,” the statement reads. “The tour is happening! We’re working hard on a few new dates and venues, which may cause a show or two to be canceled, but, if all goes according to plan, we will definitely see you at a show as soon as we possibly can.”

Like a number of other groups who took advantage of the livestream format, New Found Glory decided they couldn’t wait until the full return of live music. The band decided to launch a livestream event, the Unplugged Total Request Livestream. For the event, they used an acoustic format and offered fans a chance to request their favorite songs.

The group introduced a number of other livestream performances during the past year. In June, the band celebrated the release of Forever And Ever x Infinity with a CD release Songathon. Later that year, they also held a livestream to mark the 20th-anniversary of their self-titled album and additionally hosted a Christmas special, Home for the Holidays with New Found Glory.

As news of live music began to return, it was only a matter of time before Simple Plan and New Found Glory were back in the headlines. Then, in May, it was announced that both bands would appear in the lineup for Riot Fest.

Finally, Simple Plan and New Found Glory were able to announce that their original joint tour will take place after all.

This time around, the artists will go on the road in September and October. Along the way, they will be supported by LØLØ. The tour will make its way to a number of U.S. cities, including Austin, Seattle, Boston, New York, San Diego, Raleigh, Salt Lake City, Anaheim and Las Vegas.

To take advantage of the presale, visit here and use the password ALTPRESS.