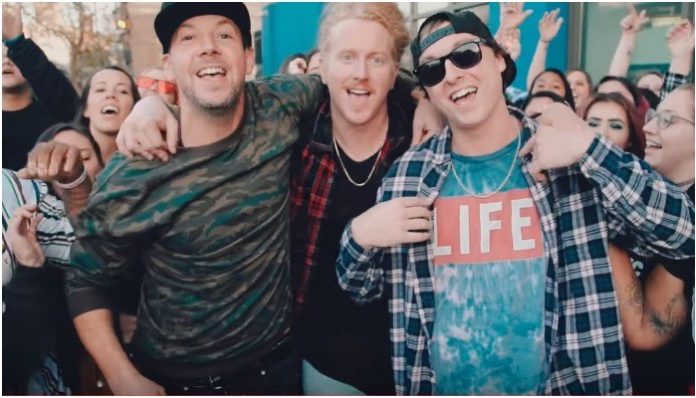 Simple Plan, State Champs and We The Kings dropped a new music video for their collaboration of “Where I Belong?”

The track for the video was originally released before the trio went on tour together earlier this year.

It took some time for them to actually make the announcement. It started with a hilarious video from Simple Plan.

“We’ve got something big happening tonight and we can’t wait for you to find out what it is! But I guess you’re gonna have to wait just a little longer… unless @State_Champs fills you in??” they tweeted.

Then, State Champs posted a video of them trying to get the announcement out to fans after Simple Plan were unable to in their video.

“Hey @simpleplan – We tried! Maybe @WeTheKings can let everyone know what’s up?,” they wrote.

And then, We The Kings tried, but failed and asked Simple Plan to take it away again. That’s when it was finally announced.

This time it wasn’t so complicated. State Champs and Simple Plan tweeted out their own teasers for the video with additional photos.

We hope you enjoy watching the brand new “Where I Belong” music video as much as we enjoyed filming it! 😆😆😆 It premieres on our Youtube page in 1 HOUR at 12pm ET 🤘⚡️🤘Come hang with us in the chat & later during our IG live at 1PM! 🤓 https://t.co/GOBFvmA3rb
📸 @instabaeth pic.twitter.com/kBEweflR8z

The video features Simple Plan and State Champs and Travis Clark of We The Kings performing the track live, alternating between shots of them on stage, on a set and among their fans.

Check out the video for “Where I Belong” below.

What do you think of the music video for Simple Plan, State Champs, and We The King’s “Where I Belong” Sound off in the comments below!

The track is available to stream here.