A new era is upon us.

Since other members of Sleeping With Sirens began to confirm their heavier direction in forthcoming music, frontman Kellin Quinn himself decided to weigh in.

In various responses to skeptical fans, Quinn further confirms the band’s path in the new year.

Additionally, another lucky music industry insider said that he heard the upcoming recordings and “can confirm” that the band is heading back to their roots.

“I can confirm as I have heard clips as well, they are heading back towards their first two albums and it’s hard af,” Twitter user ChevyFlora says. “Just wait til y’all hear the breakdowns!!”

Thanks my man! Hope you’re good! Had a blast hanging with you!

A Sleeping With Sirens member has taken to Twitter to confirm their return. Guitarist Jack Fowler says that new music is on the horizon and that it is heavier than anything they have put out to date.

Yesterday, guitarist and vocalist for From First To Last, Matt Good shared a photo to Instagram of Kellin Quinn in the studio with the caption, “Just created some insane fire with @kellinquinn.”

However, following a story from Loudwire, Fowler confirmed the “heavy music” rumors.

“We are fuckin back babyyyyyyy,” the guitarist says. “Heavier and better than ever.”

We are fuckin back babyyyyyyy, heavier and better than ever https://t.co/4neMWWs2Xy

After perusing the comment section of Good’s Instagram post, reporters found that a fan who had a friend that worked at the studio had heard a few new Sleeping With Sirens clips. The employee claimed that what he heard was “really good and really heavy.” 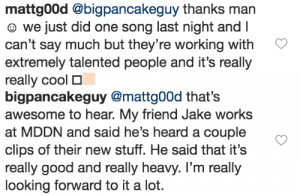 Sleeping With Sirens teased their return at the end of their latest tour cycle with Good Charlotte. In a series of tweets sending off Gossip, rhythm guitarist Nick Martin said things were only going to get crazier.

Quinn also teased a new era for SWS, claiming that 2019 would be a good year for the band.

Additionally, Quinn teased that new music would have a lot of Let’s Cheers To This influence. After replying to a fan on Twitter asking for an era-revival, Quinn simply responded, “You got it.”

Back in February, Fowler said that he was in the mood to write some 2012-sounding SWS material, which also hints at their heavy return.

What are you hoping to get out of forthcoming Sleeping With Sirens music? Sound off in the comments below.