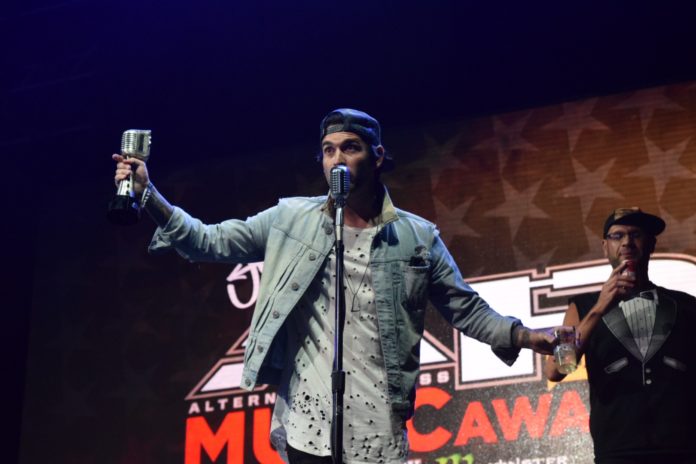 Jack Fowler of Sleeping With Sirens has won the award for Best Guitarist, presented by PRS Guitars, at the 2016 Alternative Press Music Awards!

“Mike Shea, AP, this is fucking beautiful,” says Fowler during his acceptance speech. “Mom, Dad—I’m giving this to you. I want to thank my band, my crew, Dave Shapiro and, last but not least, the fans. Without you, there’s nothing.”

After a fan vote, Fowler won against fellow bassists in A Day To Remember, August Burns Red, Memphis May Fire, New Found Glory and Periphery.

Sleeping With Sirens are nominated for Artist Of The Year and Album Of The Year at this year’s awards. Last year, they took home the prestigious award for Song Of The Year with their track “Kick Me.”

Read more: Kellin Quinn’s father looks back on seeing Sleeping With Sirens for the first time

Sleeping With Sirens’ fourth studio album, Madness, was released in March 2015 on Epitaph. The band are currently out on Vans Warped Tour.

Watch more: Note To Self: SLEEPING WITH SIRENS advise their younger selves