Well Slipknot fans, it appears that Ross Robinson won’t be working with the band on their forthcoming release after all.

Last week, we reported that it appeared Slipknot was working with their self-titled and Iowa producer Ross Robinson for their follow-up to 2014’s .5: The Gray Chapter.

A possible rumor only further believed to be true after Slipknot guitarist, Alessandro Venturella, shared an Instagram story that featured him in a studio with Robinson’s dog.

While we were stoked on the possibility of the two joining forces for the new release, guitarist Jim Root has since confirmed in his Instagram comments that the two working together was “fake news.”

In response to one Instagram commenter, he shared: “there is no Ross. Only Zool. Get it outta your head.”

See his comments below: 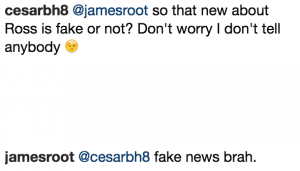 I’ll call this: “Walking to the WC with Fig without Fig but I love you, alright well…” Enjoy. #eastweststudios

It was recently reported that the band will be celebrating Halloween with a band-themed haunted house in their home state of Iowa. It’s a joint effort between the group and local Des Moines attraction the Slaughterhouse.

The “ultimate nightmare come true” will feature music, characters and imagery plucked straight out of the Slipknot catalog, as reported by The Des Moines Register. And it’s an event tailor-made for Slipknot’s dedicated fan base.

Slipknot’s album, everything we know so far:

While the band is still in the early stages of recording, in a recent Q&A session with Kerrang, the vocalist shared that the band’s next full-length effort will be reminiscent of their 2001 sophomore milestone release, Iowa.

“This is Iowa levels of heavy,” Taylor said. “And I have to go out and tour this shit at my age. I can feel those songs in my back! I am really, really excited about it.”

The band’s vocalist, Corey Taylor, has said that 2019 is the year fans will see the band’s sixth full-length effort and first record release since 2014’s .5: The Gray Chapter.

Taylor also shared that the band’s new album will blow their most recent LP out of the water.

“We have 16 songs written right now,” he adds. “And they are fucking dangerous. I loved .5 [The Gray Chapter], but this album, to me, makes .5 look like nobody’s business.”

Are you excited to hear Slipknot’s new album? Sound off in the comments!